For information on how to carry out the treatment of uterine cancer in Israel, the best specialists of the country, leave a request and we will contact you shortly.

«PapSEEK adds another dimension to screening for gynecological cancers," - write the authors, led by Yuyshuan Wang from Center Louis on genetics and cancer therapeutics and the Center for Integrated Cancer Earlier this year, some of these researchers reported CancerSEEK test for eight common. cancers. 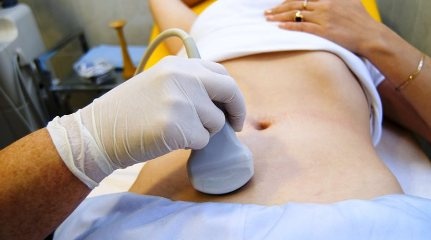 Graphic showing how PapSEEK test detects tumor DNA. Tumor cells from ovarian cancer or endometrial percolate and then transferred into the uterus and the endocervical canal, where they can be collected via Tao or Dad brush brush.

Using various approaches for collecting a sample Pap (PAP - test) was diagnosed in the course of the test endometrial cancer at 81% -93% of cases of ovarian cancer and in 33% and 63%, with virtually no false-positive results (0 to 1.4%) in healthy people.

According to the researchers, their study provides the basis for evaluating PapSEEK in a large prospective study. They show that the most natural contenders for this test are women who are at high risk of gynecological cancers due to hereditary factors, obesity or symptoms such as bleeding or postmenopausal uterus.

PapSEEK usefulness lies in its ability to identify easily detectable wounds endometrial and ovarian cancers at an early stage using a sample obtained from a conventional Pap test, - they comment. Current tests such as transvaginal ultrasound, are invasive and leads to a plurality of false-positive results. Moreover, they are not perfect and are not recommended as a tool for screening in the general population, Wang and colleagues note.

Wang and his colleagues analyzed samples of 1658 individuals - 656 with cancer of the endometrium or ovaries and 1002 healthy control individuals.

They took advantage of the fact that the cells of the endometrium and ovaries collected in the endocervical canal, where they can be collected with the help of Pope brush. Then brush dipped in liquid preservatives, and the cells are applied to the slide for cytology classical Pap smear and PapSEEK test.

Researchers have isolated the DNA from the cells using techniques reducing the frequency sensitive polymerase chain reaction (PCR), the sequencing-called secure systems to identify mutations in 18 genes. They aneuploidy were also determined using the method based on PCR amplification ~ 30,000 loci for determining gains or losses on chromosome arms.

They then used two separate methods to improve the sensitivity of the test. In one approach, they used a brush "Tao", which allows the endometrial sample closer to the anatomic sites of tumor. In the second approach, they conducted mutational analysis of circulating tumor DNA prepared from liquid biopsies.

Of the 328 women with endometrial cancer 81% of the samples tested positive. Of these, 78% were cancers at an early stage, and 89% of cases were late stage disease. TP53 and PTEN were the most common mutations observed respectively in 64% and 41% samples.

Of the 245 women with ovarian cancer29% of the samples brush brush positively. Of these, 28% were cases of early stage disease and 30% of cases were late stage disease. The most frequently mutated gene TP53 (74%).

Wang and his colleagues found aneuploidy in 38% of endometrial and ovarian eggs 11%.

Of the 714 women without cancer only 1.4% of the samples were positive when tested PapSEEK, providing high specificity to 99%.

Using PapSEEK test for Tao brush samples, the detection rate increases for endometrial cancer (93%), and for ovarian cancer (45%). Mutations are consistent with those observed in hand specimens. It is noteworthy that none of the samples brush Tao of women without cancer has not been tested positive - 100% specificity.

Wang and his colleagues note that to confirm the observations from this retrospective analysis requires large prospective studies.

The authors of these studies need to answer a few questions, the authors acknowledge. Is the sample Lotus Dao better than the brush sample? The researchers explain that the brush Tao, approved by the Office of control over the United States Food and Drug Administration allows you to select all of the endometrial cavity without damaging the myometrium or infection of the cervix. It can be used on an outpatient basis without anesthesia; "For a potential screening test is well tolerated," - says they are.

Among the issues that need to be addressed - the question of whether to use PapSEEK along with other approaches, such as the serial test CA-125 or liquid biopsy. Another question relates to better clinical management of women who positively assess the situation with PapSEEK. Also unknown interval between trials.

The authors point out that the cost of PapSEEK will be higher than the cost of the Pap smear; the cost would be comparable to the cost of a colonoscopy, mammography and computed tomography.

Researchers are optimistic, and optimistic conclusion. «PapSEEK adds another dimension to screening for gynecological cancers," - concludes Wang and colleagues.

Hysteroscopy clinic Assuta performed under general anesthesia. appointed by the US and commissioning tests before the study patient.

Myomectomy by leading doctors clinic Assuta, using modern technology to remove uterine fibroids, which contributes to the rapid recovery of the patient.

Embolization of uterine fibroids in Israel

Of of fibroids uterine embolization - treatment of gynecological pathology. Specialists Israel will of help to the get rid of of of fibroids. The postoperative period was held under the supervision of doctors.