DNA test to predict the risk of relapse of leukemia

A group of Canadian and Korean scientists and doctors developed the first test based on DNA, which allows them to communicate, which patients will have a recurrence after receiving chemotherapy and a bone marrow transplant. The findings, published recently in the journal Blood, may help physicians improve patient outcome by changing the treatment until the cancer has come back in full force.

For information on how to carry out the treatment of acute myeloid leukemia in Israel, the best specialists of the country, leave a request and we will contact you shortly. 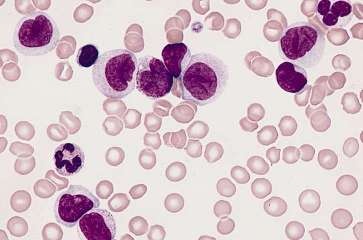 "We can detect mutations in bone marrow cells of patients three weeks after transplantation, and on this basis to predict the likelihood of recurrence," - says Chzhaoli Zhang, a principal investigator at the University of Toronto, Donnelly Center for Cell and Biomolecular Research, and Professor of Molecular Genetics and Computer Science, who led the study.

Acute Myeloid Leukemia (AML) - the most common type of leukemia in adults, including around a quarter of all cases. It affects the bone marrow, the spongy tissue inside bones where all blood cells are produced. The disease is associated with overproduction of immature blood cells that eventually develop into normal blood cells. This type of cancer that begins suddenly and rapidly evolving, requiring emergency treatment.

"The AML is very important to predict who will recur, - said Dennis Kim from the Center for Cancer Princess Margaret at the University Health Network (UHN) and Associate Professor of Medicine U of T, the leader of the study." If we can identify a person at high risk of relapse, then we can make early therapeutic intervention that can improve their results in the long term. "

Until now, there was no good way to detect the number of leukemic cells that are resistant to treatment, and that lead to a relapse. By the time when these cells are picked up by available methods, the cancer usually is already at an advanced stage.

Using the new technology of DNA sequencing, next generation sequencing-called, or NGS, the team was able to identify treatment-resistant leukemia cells, or clones, even though they make up a tiny fraction of all cells in the bone marrow. The nature of the mutations showing further clues about how best to target the disease to drugs.

"With our method, we can not just say that this patient will recur, but we can also say that their recurrent clone contains certain mutations, which may be a target for therapeutic compounds that can be used to treat a patient," - says Kim .

Next, the researchers identified mutations in DNA, which are present at the time of diagnosis, and were looking for the same mutation in each sampling point. They found that, although chemotherapy and bone marrow transplantation eliminates the majority of leukemia cells, which leads to a reduction in the frequency of mutations, some initial mutations can still be found three weeks after transplantation, indicating the presence of cancer-resistant cells. Because these same mutations are expanded in frequency after relapse, evidence suggests that the same cancer cells that have begun to leukemia, are also responsible for the return of the disease.

Analysis of the data required to make the team, Zhang developed a new computational tools for the analysis of mutations that lead to leukemia, in the sea of ​​data sequences. This allowed them to determine the residual low frequency mutations 0.2% to be used as a surrogate marker for providing personal chance of relapse.

"Patients who have had a chance mutation more than 0.2%, were four times more likely to relapse than those patients who had a lower chance of a mutation or it was not at all", - says Tae Hyung (Simon) Kim, graduate student computer Science in Zhang's lab.

The researchers hope that their DNA test will become commonplace for monitoring prognosis of the disease, although they say that it may take five to ten years.