Effectively missile defense in the diagnosis of prostate cancer? 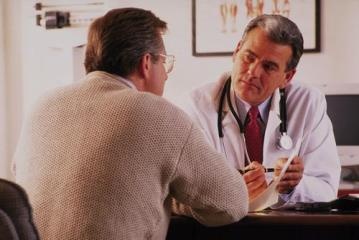 Digital rectal examination (ABM) has always been a part of the annual physical examination in men for the diagnosis of prostate cancer, but in recent years the value of this method is in doubt.

To the study According, published in the journal Current Medical Research and by Opinion , the choice of method for prostate cancer examination the doctor prescribes individually, but in most cases the use of modern techniques.

Digital rectal examination - this is the oldest method of detection of malignant prostate tumors. During the procedure, the doctor wears gloves and introduces lubricated finger into the rectum to determine whether a patient has an increase zhalezy or rectal tumor. In the case of negative results, the patient is directed to take other tests.

Rectal examination accompanied by some discomfort. Due to the fact that these procedures are invasive, many people neglect them.

Terletskoy and his colleagues decided to find out if the need remains in the rectal digital examination, if there were more accurate ways to detect prostate cancer, such as, for example, a blood test. With this large number of oncological disease prostate specific antigen (PSA) is formed in the blood.

The researchers conducted an experiment, which was attended by 38.340 subjects. A digital held They rectal examination and tests PSA annually over the past three years, and then became participants in the experiment in the next 13 years. Scientists have also carefully studied the medical literature on the topic.

Were the interesting Especially results of the survey: for Among all tested 5,064 men the Received a normal test results the PSA and the AT Same | time "abnormal" results of digital is a rectal Examination. However, only 2% of men in need of further observation and treatment.

According to researchers, a digital rectal examination, in some cases, helps to detect prostate cancer, but at the same time, this procedure is unnecessary for most men.

In this case, previous trials have shown that PSA tests are superior to rectal examination (in the same patients showed 680 cases of prostate cancer PSA test after the disease, and only 317 cases after seeing a proctologist).

What type of diagnosis to choose: rectal examination or PSA depends on each situation. In addition to weighing the pros and cons of a person should first consult with your doctor about the need to check for prostate cancer.

Based on materials techtimes.com

The influence of testosterone on the development of prostate cancer. The opinions of scientists. Conclusions of their research.

Lack of vitamin D increases the risk of prostate cancer

Effect of vitamin D on the development of prostate cancer. Scientific opinion. Prospects for further research.

forecasting techniques in the treatment of prostate cancer - reduced side effects

US scientists are developing a forecasting technique, by which choice of treatment would be the most optimal and reduce side effects.