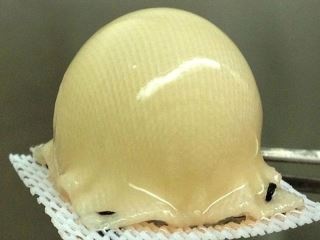 A group of researchers of the American company Cytex Therapeutics from North Carolina made a sensational discovery in the field of orthopedics. Scientists have developed an artificial cartilage, which is grown in the laboratory. At the core of the graft material - confiscated from the patient's stem cells. With the invention of the product, doctors will be able to change the cartilage of the hip joint in patients with arthritis. Not tested on humans, so to speak about the side effects and cost of material prematurely.

Scientists theorize that created partially of natural and artificial cartilage components after installation gradually dissipate, leaving behind natural counterpart. This will help compensate for the sick the cartilage of the alternative recovery methods. Mostly made for the development of young patients who are planned arthroplasty.

Today diagnosed early arthritis subjected to immediate treatment with anti-inflammatory therapy, physio and analgesics. It helps to cope with the consequences of the disease, without solving the root causes of its origin.

The researchers conducted an experiment in which the stem cells combined with plastic, saturate them to reduce inflammation component. Using 3-D printer was produced analogue simulating natural articular cartilage. The aim of the authors of the technology is to create a material that can serve the owner for 10-15 years. Developments underway for hip and other bones of mobile connections.

Hip fracture in the elderly - the verdict?

The urgency of the problem. The study of physical activity of older people before and after a hip fracture. The discussion of the results. Scientific opinion.

An alloy of gold and titanium to replace titanium prosthetic joints, extending the duration of their operation.

Advances in the treatment of patients with rheumatoid arthritis

Timely intensive treatment has a beneficial effect on the lives of patients with rheumatoid arthritis.