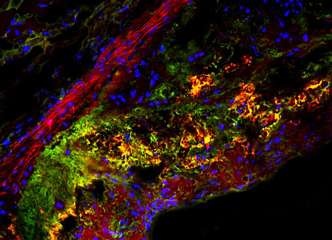 In the study of mice, researchers from the School of Medicine at Washington University in St. Louis have shown that the natural sugar called trehalose, helps to reduce atherosclerotic plaques, which are located inside the arteries. These plaques are a sign ofcardiovascular diseases and lead to increased risk of heart attack.

The study is published June 7 in Nature Communications.

"We are interested in improving the ability of these immune cells, called macrophages, to remove cellular debris, which makes them super-macrophages," - says senior author Razanov B., MD.

Macrophages are the immune cells responsible for cleaning many kinds of cellular waste, including deformed proteins superfluous fat droplets and dysfunctional organelles - specialized structures within cells.

"Atherosclerosis macrophages are trying to fix the damage artery" - explained Razanov. The study Razanov and his colleagues showed that mice prone to atherosclerosis, decreased "plaque" in the arteries after administration of trehalose. Plaque sizes were 0.35 square millimeters in control mice compared to 0.25 square millimeters in mice treated with trehalose, which reduced plaque size by 30%.

The effect disappears when the mice were administered orally or trehalose when administered other types of sugar, even with similar structures.

Trehalose is found in plants and insects, it is a natural sugar, composed of two glucose molecules linked with each other. He is approved by the Food and Drug Administration for human consumption and is often used as an ingredient in pharmaceutical formulations. Past performance of many research groups showed that trehalose is an important cellular process called autophagy.

In Razanov study, and his colleagues show that trehalose works by activating a molecule called TFEB. Activated TFEB binds to DNA. This binding is converted into specific genes, creating a chain that leads to the production of more organelles, which destroy the trash in the cells.

Researchers continue to study the trehalose as a potential therapy for atherosclerosis, the more it is safe for humans. However, trehalose is likely to lose its effectiveness if taken orally due to the enzyme in the digestive tract. According Razanov, the research team is looking for ways to block this enzyme, trehalose to maintain its structure and function.

Data scientists from the UK: a new drug containing aspirin, will open up new horizons for the treatment of glioblastoma.

Horoideremiya and REP1 protein. A new drug therapy may cancel a genetic error that causes degeneration of the retina.