Research can lead to new ideas about the cancer risks 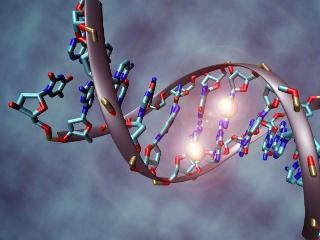 New research from Indiana University have identified "hot spots" in DNA, where the risk of genetic mutations significantly increased.

These mutations arise due to the fact that errors can occur when the DNA is replicated during cell division. A recent analysis in which it was found that random errors in DNA play an important role in many types of cancer, underlines the need to better understand what causes these errors.

Research presented in two articles in the "Highlights" of the August issue of the journal "Genetics." Certain "hot spots" are specific for E. coli and related bacteria, but this work can serve as a "map" for finding such problematic points in human DNA.

"This research brings us closer to understanding how cell replication interacts with DNA," - Patricia Foster said, Professor, Head of Department of Biology Bloomington College of Arts and Sciences. "If you understand exactly why an error occurs at a certain point of DNA in bacteria, it brings you closer to an understanding of the general principles."

the risk of cancer of the DNA replication error is highest in certain tissues such as the prostate and bone, where a higher rate of cell renewal means that there is more room for error when copying DNA.

"There are parts of the genome that contain" cancer helpers ", which changes in the DNA can allow proliferation of tumor cells," - said Foster. "If you knew what DNA regions have a higher risk of mutations, you can focus your analysis on these" hot spots "to predict what will happen next."

In E. coli, researchers found that the probability of the DNA replication error is 18 times more likely in DNA sequences, where one and the same chemical "letter" in the sequence is repeated several times in a row. They also found that the errors were 12 times more likely in DNA sequences with a certain pattern of three letters.

These samples letters in the DNA sequence had previously been identified as a general space for replication errors. But Foster said that the amount of data in the new study - an analysis of the whole genome of the bacteria in 30 000 mutations accumulated over 250,000 generations - provides a "statistical weight" needed to accurately determine the error rate to an unprecedented level of accuracy .

The research also highlights the importance of the two DNA replication systems: enzyme "corrector" and a molecular pathway called mismatch repair. Both of them are protected against errors by an enzyme called DNA polymerase which copies the genome with a staggering rate of 1000 characters per second.

"When we turn off the backup system, we begin to see the" clean "Error - the place where the polymerase is more likely to make a mistake without interference from other processes," - said Foster. "Until now, I do not think anyone could really see the seriousness of the hot spots in the DNA."

Examination and treatment in Israel offers Assuta Hospital. Please contact any branch of the clinic, located on the territory of Israel, which can help eliminate health problems.