How to communicate with the cancer and immune cells 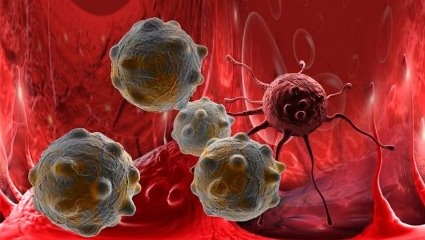 Although the cells and can not write messages to each other as we are, they can still communicate. One of the ways of communication - it exosomes are tiny spherical "packets" of information, which they emit.

David Klinke, a researcher at the School of Medicine of the University of West Virginia and the Cancer Institute decrypts the content of exosomes, which are released by cancer cells. Examination of information contained in exosomes, and how they affect other cells may offer new targets for cancer immunotherapy.

"Exosomes are like little balls of information transmitted between cells," - says Blades.

They contain a variety of proteins that are the building blocks of cells as well as RNA, which gives instructions for creating new proteins and genes controls functions.

"If we compare each protein with the proposal, the exosome is a book then," - said the scientist.

Exosomes - it's not just "bin" of the cell

Blade and his colleagues decided to find out how to "book" of information that are sent to the cancer cells, may affect the ability of the body to identify tumors and fight with them. But first they had to learn that the secret of the cancer cells in their exosomes.

Thus, scientists have collected exosomes secreted by melanoma (a type of cancer, striking the pigment-producing cells) and the identified types of proteins and RNA contained therein.

They found that melanoma cells, apparently, selectively packed some proteins and RNA in their ekzasomy while keeping others. This discovery is contrary to the long-standing hypothesis that exosomes contain a random assortment of cell contents.

"Previously it was thought that exosomes were kinda garbage bin cells - researchers noted -. But there was repeated detection of exosomes in the last ten years The researchers were able to identify them and find ways of isolation Now we try to understand what they.. are doing exosomes and their role in cell communication. "

Suppression of the immune response

The team then stimulated T cells - type of immune cells that seek and destroy "invaders" - so that they recognize and kill melanoma mx under normal conditions. Blade compared this process with a flu shot.

According to the scientist, each T cell recognizes the unique pattern. When vaccination against influenza is pre-activated T cells. It is necessary to recognize certain patterns that are expected of the flu in any given year.

Initially, when the researchers directed T cells to melanoma, the T-cells to respond normally - they quickly multiply to cover cancer. But as soon as the scientists added exosomes in melanoma sample, T cells stopped proliferating. Thus, they suppress the immune response.

The study was published in «FEBS» journal, International Journal of the Federation of European Biochemical Societies, 2018. This year, Blade and his colleagues won the Richard Perhama for their publication. «FEBS» invited them to present their results at the FEBS Congress in Krakow, Poland this summer.

The results of the scientists show that cancer cells can use their exosomes to avoid eradication by suppressing the activity of T-cells.

"Exosomes create an environment for the survival of cancer cells - said Blades -. If the exosome is a book filled with information, it affects the way the immune system responds to its environment But if we understand how the immune system reads the information and. how it affects the T-cells, we may be able to design immune cells able to ignore or get rid of exosomes, they are facing. "