As with passive smoking suppresses the immune response acrolein 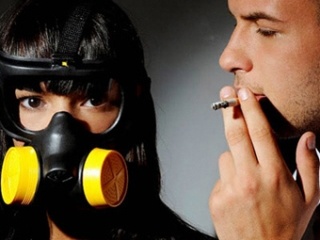 The World Health Organization (WHO) estimates that each year passive smoking causes 600,000 deaths only in Austria smoke cigarettes die two or three people a day. In a study recently published in the scientific reports, scientists from Vienna for the first time determined the organic compound acrolein (acrylic aldehyde) as the cause of a malfunction of the immune defense against tumors due to passive smoking.

"When people smoke, acrolein is released into the atmosphere through the sidestream smoke. Anyone who has ever sat in a smoky pub, inhales it. But we are more concerned about the long stay in the premises where smoking is allowed, and the effect of nicotine on children, family members and pets in a house with smokers men or in the car ", - says researcher Eric Jensen-Jarolim and author Francis Roth Walter from the Institute of Pathophysiology Meduna and allergy research Institute in Vienna.

Acrolein is toxic and damage genetic material. He does not respond to T-cells, reducing the immune system and helping the growth of the cells of a malignant tumor. Until now, scientists did not know that acrolein has the ability to suppress the immune system not only by smoking or passive smoking, it acts after. However, acrolein is produced not only during smoking, when overheated animal fats or vegetable origin (during cooking). The substance is released and the combustion of wax, ink, biodiesel. Typical smell of acrolein appears immediately after the candle dies out.

"Inhalation -. Not the only way to activate the substance acrolein is" glued "to the dishes, clothes or curtains, and so begins to act much later, for example, through the skin to protect children and pregnant women need to eliminate contact with cigarette smoke or its residues especially at home, "-. says Erika Jensen-Jarolim.

In animal models, researchers have identified the positive effect of acrolein on the immune system: as it suppresses the immune response, smokers are less susceptible to allergies.

Researchers are studying whether helped laws banning smoking in public places to improve the health of the population.

Shanghai extends the ban on smoking in public places

Shanghai has tightened a ban on smoking in public places.

Stem cells may reduce some damage in human lung cells.