Treatment of stomach cancer at a late stage: an inhibitor of TAS-102

Combined treatment that is already used for the treatment of colorectal cancer significantly increases overall survival when added to the therapy for patients with advanced or metastatic gastric cancer.

For information on how to carry out the treatment of gastric cancer in Israel, the best specialists of the country, leave a request and we will contact you shortly. 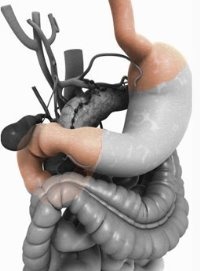 The combination of a single analog tifeninovogo trifluridine inhibitor and TAS-102 was tested on more than 500 patients with metastatic gastric cancer. Compared with placebo TAS-102 increased the overall survival of 31%.

The new findings were presented at the World Congress on gastrointestinal cancer in 2018 (WCGC).

According to lead author Josep Tabernero, MD, the combination treatment showed a statistically and clinically significant improvement in survival rates. TAS-102 is a new and effective treatment option for patients with refractory gastric cancer in the late stadii.Tabernero explained that most cases of stomach cancer, which is the fifth most common form of the disease around the world, it is characterized by metastatic disease and as a result, have a poor prognosis, the overall five-year survival rate is 4%.

A team of researchers chose 507 patients from 18 countries, who were divided into two groups: the first received TAS-102, and the second - a placebo. The median age was 64 years in the group TAS-102, and 62.5 years in the placebo group; 75% and 69%, respectively, were men. At 54% and 58% of patients in both groups had three or more metastatic uchastkov.Bolee 60% of patients in both groups have been at least three courses of treatment. The most often used medications were fluoropyrimidine taxane and irinotekan.V group TAS-102, overall survival was significantly higher and placebo in median survival of 5.7 months. After 12 months 21% of patients treated with TAS-102, are still alive, compared to 13% of patients in the placebo group.

As expected, patients treated with TAS-102, were tested more side effects than in the placebo group, while 80% vs. 58% .However, TAS-102 patients had a higher risk of side effects of hematologic (neutropenia (38%) leukopenia (21%), lymphopenia (19%), anemia (19%) and thrombocytopenia (6%). In the discussion after the presentation Tabernero explained that, although the current data focused solely on survival and security, continues to review other clinical variables and biomarkers. Scientists are studying whether it is possible to combine the TAS-201 with other and agents.

Surgery for gastric cancer in Israel

Chemotherapy for gastric cancer in Israel

Modern methods of treatment of gastric cancer in Israel: basic, complementary and alternative therapies. treatment programs for the development of the disease stage.

Treatment of colorectal cancer in Israel

Treatment of colorectal cancer in Israel, under the leadership of Moshe Inbar offers Assuta Hospital.