About 1/3 of patients with malignant tumors in the latter stages, which come in a specialized department of palliative care, suffering from deep vein thrombosis (DVT). However, DVT is not associated with significant symptoms or survival - report researchers from the University of Hull, UK. 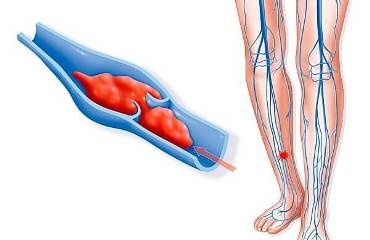 Since the results of a new study suggest that deep vein thrombosis causes minimal symptoms, and there is no evidence that it affects the life expectancy, the scientists consider it necessary to review the use of pharmacological thromboprophylaxis in this population.

"Our results challenge the current recommendations for the prevention of venous thromboembolism in cancer in the last stages" - the researchers report.

The study was published online in the «Lancet Haematology» magazine.

It involved 343 patients with advanced cancer who were hospitalized in the specialized departments of palliative care and the UK that have been evaluated on the proximal deep vein thrombosis. Evaluation was performed using ultrasound bilateral thigh and femoral vein for 48 hours after the patient received.

Subsequent analysis showed that about a quarter of patients who had no history of DVT at admission, were diagnosed with DVT after admission to the palliative care.

In addition to swelling of extremities, the study showed no effect of thrombosis of the femoral vein in the symptoms associated with venous thromboembolism, thromboprophylaxis and have no effect on the risk of deep vein thrombosis.

These results suggest that venous thromboembolism is a manifestation of the running of cancer, and that thromboprophylaxis is of limited value.

Examination and treatment in Israel offers Assuta Hospital. Please contact any branch of the clinic, located on the territory of Israel, which can help eliminate health problems.