According prospective study phases 2, accurate radiation therapy in high doses for the treatment from one to three metastatic lesions significantly increases progression free survival among men with recurrent prostate cancer. 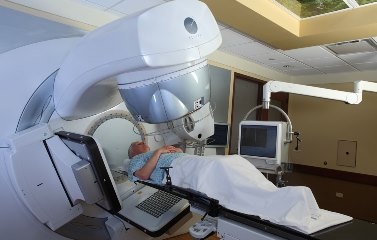 "There is a hypothesis that the first multiple distribution sites can pave the way for future metastases, and if we can in a timely manner to treat all detected education, achieve long-term control and recovery, - says Ryan Phillips, MD, from the Cancer Johns Hopkins Center in Baltimore, Maryland -. We found that stereotactic ablative radiation for metastatic prostate cancer gives a significant advantage for the progression-free survival ".

The study was presented at the annual meeting of the American Society for Radiation Oncology (ASTRO) in 2019.

The study involved 54 men who had one to three metastatic sites. Thirty-six men were assigned to the main group of ablative radiation, while the remaining 18 patients - in the observation group. Precise cancer therapy delivers a higher radiation dose to the tumor site for only one or a few treatments.

"Our primary end point was the observation of disease progression within 6 months", - says Phillips. Progression was defined as the increase in the level of prostate-specific antigen (PSA), detection of new metastases using conventional imaging, the presence of symptoms associated with metastatic prostate cancer. After 6 months in 19% of patients in the ablation radiation disease has not progressed.

In addition, 35 of the 36 men held ablative radiation, passed the experimental visual analysis of PSMA PET (positron-specific membrane-emission tomography with the prostate-specific membrane antigen) at baseline and 6 months later. Phillips explained that PSMA is highly expressed in cells of prostate cancer; Using radiotracer, physicians identify lesions that may be missed by conventional imaging.

The results of the subgroup analysis showed that men who had radiation therapy to all homes, after 6 months had significantly fewer metastatic lesions.

Researchers have also observed higher activity and changes in the immune system in the group ablative irradiation after 3 months post-treatment baseline. In the observation group in the immune system in men there was no change. "This suggests that the therapy appears to cause a system-wide immune response, similar in scope to the fact that we see after vaccination, - says Phillips -. There are situations where exposure may stimulate the transmission of signals from the cancer cells that have not died yet, to bring them to immune cells and better identify the difference between normal healthy cells and cancer. "

The Group also appreciated the high risk of mutations associated with a poor prognosis in prostate cancer. In this analysis, men who have been detected at least one high-risk mutation prior to therapy showed results equivalent to men in the observation group, while men who do not have high-risk were mutation, achieved significantly better results than men in the observation group.

"There may be initial factors that determine the effectiveness of therapy or the need for alternative treatment strategies," - Phillips explained.

Brigitte Kunz, MD, of Duke Cancer Institute, North Carolina, noted that the use of therapy in this group of patients is still relatively new, and that the additional use of PET imaging has allowed researchers to gain a better understanding of the biology of metastatic prostate cancer. This is the first study that could provide a biological justification for the treatment of metastases.