A child eating a low-protein diet during pregnancy and lactation significantly more likely to develop prostate cancer as they age. This is the main conclusion of a study conducted on rats at the Institute of Biological Sciences, University of São Paulo (IBB-UNESP) in Botucatu, Brazil. Results of the study, which was supported by the Research Foundation of São Paulo (FAPESP), were published in the "Journal of Gerontology: Series A». 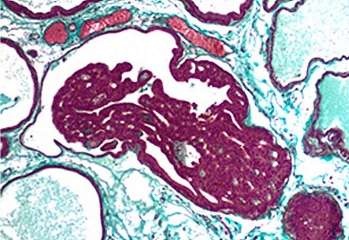 "Our previous research has shown that prenatal exposure to low-protein diet impairs the development of the prostate gland. In our last published study confirms that this effect was observed in the postnatal period, increasing the incidence of prostate cancer, when a man grows old "- said Luis Antonio Dzhutulin Junior, a professor at the IBB-UNESP and principal investigator of the study.

The model used in Yustulina Laboratories, is to feed the diet of pregnant women with only 6 percent protein. Laboratory rats usually eat a diet, which contains from 17 to 23 percent protein.

"The data in the literature show that 12 per cent - the minimum protein content required to rats tolerate pregnancy without any problems", - said Yusulin.

Pregnant rats included in the study were divided into three groups. The control group was fed the standard diet with at least 17% of the protein during pregnancy and 21-day lactation period. After delivery, also received a standard diet. No cases of prostate cancer in these descendants not been 540 days after birth.

The second group was 6 percent protein diet only during pregnancy. After birth, they were fed a standard diet, as well as their children. The assessment carried out through 540 days after birth, 33 per cent of their male offspring had developed prostate cancer. The third group was fed a low protein diet during pregnancy and lactation, and 50 percent of their offspring developed prostate cancer.

"We had a histopathological analysis of the prostate of these animals, and in all three groups, we found prenaoplasticheskie changes that could interfere in the glandular function, such as hyperplasia, epithelial atrophy and intraepithelial neoplasia, and the latter can be a carcinoma, according to the data in the scientific literature, "- said researcher. "But the cancer was detected only in animals exposed to low-protein diet in their fetal life."

In a previous study published in 2017 in the General and Comparative Endocrinology, describes some of the disturbances caused by the offspring of maternal low protein diet.

The analysis conducted for the 10th and 20th days after birth showed that offspring of females that were fed a low protein diet was less differentiated epithelial cells, which is considered a sign of retarded development. The prostate also showed functional impairment, secreting and maintaining fewer prostate fluid.

It is worth recalling that the function of the prostate is to produce fluid that protects and nourishes the sperm, making it more dilute. "Generally speaking, these animals had a low birth weight, less developed organs and altered levels of hormones", - said Yustilin.

In a recently published study, the researchers collected blood in male rats. They found an imbalance between levels of male and female hormones between the descendants of mothers who fed a low protein diet, and the offspring of the control group.

According Yustulina, in the group with low protein content in the PND 21 no reduction in testosterone levels, as this is the stage on which grow the offspring of rats.

"Our previous studies have shown that rats exposed in utero low-protein diet, are born small but pozroslev they no longer showed differences compared with the control on the size, volume or prostate hormone levels," - said the coordinator of the FAPESP project. "In our new study, differences emerged as they age. It seems that aging has become the second cause of the body, given that the first one was a low-protein diet at an early stage of development."

Researchers are now checking the hypothesis that the impact of changes in the level of hormones in the elderly contributes to carcinogenesis (tumor formation).

"We have seen this in the prostate, but other studies have shown that low birth weight caused by malnutrition in mothers correlated with altered levels of insulin and an increase in the frequency of the metabolic syndrome and heart disease," - said Yustulin.

Research group IBB-UNESP is currently studying ways of synthesis of sex hormones in order to understand how low-protein diet has an effect on the estrogen-testosterone balance. They also want to show the mechanism by which a hormone imbalance may contribute to the development of prostate cancer.

Hormone therapy for prostate cancer: basic techniques and preparations, indications for treatment, characteristic of treatment options for resistance to the cancer treatment, side effects and mitigation measures.