A new direction for patients with head and neck cancer 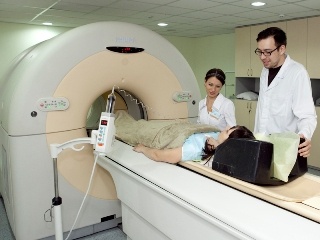 Patients with smoked more than 10 packs throughout the year tend to develop a particularly dangerous form of cancer squamous cell carcinoma of the head and neck (HNSCC), whose prognosis is poor, and treatment in the last two decades, little has changed. Nevertheless, the recent results of clinical trials phase 1 group of head and neck cancer at the University of Colorado Cancer Center offer a new direction for these patients. Implementation of the first of its kind study of oral inhibitor of PARP olaparib using the drug cetuximab with anti-EGFR and radiation led to a 72 percent survival rate for two years in 16 patients in the study, compared with an expected two-year survival rate of about 55 percent on standard treatment.

For information on how to carry out the treatment of throat cancer in Israel, the best specialists of the country, leave a request and we will contact you shortly.

"Colorado encourages innovation, and this process was certainly groundbreaking when it was developed by our group," - says David Raben, MD, Cancer Center researcher and professor of the department of radiation oncology medicine. "Much attention is deserves Antonio Jimeno, MD, Ph.D., who was very supportive of the idea and helped to move forward together with Dr. Sana Karam and Dr. Daniel Bowles."

The drug cetuximab is designed to transmit signals EGF-receptor (EGFR), and while it has received FDA approval in 2006 for use against head and neck cancer, excessive expressing of EGFR, Raben said that there is considerable room for improvement.

At an early stage of development of the drug showed remarkable activity in women with the BRCA mutations, «but we wanted to know if they have worked in other diseases," - said Raben.

Olaparib inhibits the action of an enzyme known as PARP, which is important for DNA repair. HNSCC have been heavy smokers tend to carry a heavy load of DNA damage. And radiation creates additional DNA damage. When olaparib eliminates the ability of the cancer to recover DNA, it can push cancer cells after inflection point damage and cell death. Thus, PARP inhibition and radiation can be synthetically lethal, which means that they are used together disadvantages in gene defect that leads to enhanced cell death.

In fact, laboratory work colleagues Rabenau and CU Cancer Center, including Hsiao-Ching Wan Ph.D. Barba Frederick, Ph.D. and Ariel Hernandez, among others, shows that PARP inhibitors, such as olaparib, may also increase the effects of drugs against EGFR, such both cetuximab.

"The traditional approach to this type of cancer chemotherapy using cisplatin along with radiation. I have seen evidence that the combination of cisplatin and olapariba may be too toxic for the patient's blood. Therefore, our team studied this alternative approach, which we hope to offer a more targeted treatment in the poor prognosis group, "- said Raben.

In addition to the promising results of survival, the study reinforces earlier work showing that cancer patients who continue to smoke, getting treatment tend to decrease, than those who quit smoking.

However, the survival advantage was due in court with additional side effects, some of which appeared relatively late in the course of the study (demonstrating the importance of long-term follow up of patients in the study phase I).

"We have seen an increase in skin toxicity, which was not unexpected, and we have learned that when you combine olaparib with radiation, you need to perhaps one-tenth of the dose that you would use when using only olaparib», - said Raben . the most common side effects were dermatitis (39%) and mucositis (69%). Several patients experienced an increased long-term fibrosis, and in one there was stenosis of the carotid artery, although Raben indicates that some side effects may be caused by the continuing influence of smoking.

"Now the question is whether we should move this combination in a randomized phase II study or use what we have learned to develop new combinations", - said Raben. For example, "in the community oncology want to combine recovery inhibitors of DNA damage, such as olaparib, with immunomodulating drugs, and it may reduce the overall toxicity in combination with or used after exposure," - he says.

Or Raben suggests that targeted therapy and immunotherapy could be used earlier in the course of treatment, pointing to the upcoming clinical trial co-author of Sanaa Karam, MD, Ph.D., who will test the ability of radiation and immunotherapy compress tumor cancer before surgery.

"This study lays the groundwork for testing combinations of targeted treatments for head and neck cancer in heavy smokers. We hope that this test could also serve as a model for the development of platforms drugs in phase I in all areas of disease in the CU. With our colleagues we see in the development of therapies that this test provides the basis for developing a new self-contained program of radiation therapy I development phase. in the end, we hope that one of these "branches" of research will lead to a new paradigm for this population who desperately need it. "