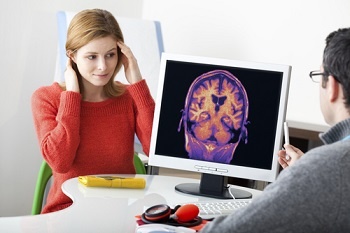 When patients are diagnosed with glioblastoma, it always means that the chances of survival are practically no. Different methods of treatment have been tested in clinical trials, but few of them have improved overall survival.

At the moment, there is another approach to treatment. It includes the wearing device (Optune, Novocure Ltd) on the head. Processing apparatus transmits the tumor field.

The new results of a study in which all patients with glioblastoma received standard chemotherapy, the patients who have used this device, lived longer by 5 months, than those who did not.

All participants in the study, newly diagnosed with glioblastoma were standard chemotherapy treatment, and then maintained treatment with temozolomide (Temodar, Merck & Co). The device is worn randomly selected cancer patients.

After a median observation period of 40 months and minimum 2 years of observation of the median survival was 20.9 months for patients who used the device against 16.0 months for those who did not.

"These results contrast with more than 23 randomized studies conducted over the past decade that evaluated new agents or intensified treatment strategies (e.g., temozolomide, tsilengitid, nimotuzumab, bevacizumab and rindopepimut) for treatment of patients diagnosed with glioblastoma and failed to demonstrate improved survival" - note the authors of the study.

"Innovative methods of treatment of glioblastoma needed, and we have a treatment that improves survival," - said Dr. Stupp at Medscape Medical News.

"Currently being sought to determine whether this new method is effective in other cancers such as cancer of the pancreas and lung, or malignant ascites," - said Dr. Stupp.

The fact that this device improves survival in patients with glioblastoma, baffled nonbelievers and agnostics. Many experts say they do not understand how the treatment works.

The apparatus consists of electromagnetic waves, which are supplied via the electric field generator by four transducer array (similar to electrodes) are placed on shaved scalp. Proper placement is carried out by means of MRI. Apparatus invasive and portable and comprises a battery charger, and a battery power source if the electrical outlet is not available.

The creators of the device say that the second-generation system is smaller and lighter - it weighs only 2.7 kg. Users can hide it under your hat, if they wish.

What some find puzzling - this is how electromagnetic fields affect the disease. Preclinical studies have shown that the device gives cell division, prevents the mitotic process, which is crucial for cell division. Thus, the device kills only glioblastoma cells in the brain, and leave healthy.

"Clinicians are still trying to understand how it works," - he said. He noted that patients continue to experience disease progression when using this device, and "we do not know the mechanism of action for this progression ... When other treatment progression is explained on the basis of biochemical evolution / resistance."

However, he noted that the test of EF-14 was well designed. The new device is "intriguing, because for the last 50 years, there was very little glioblastoma therapies," - he said. "Nevertheless, in the end, benefit from this method, only a few months. We need to do better, "- he said.

During this study the treatment device was conducted for 2 years or until disease progression. According to the creators, in the treatment of patients should shave twice a week, and microchips are changing every time. Patients have the opportunity to have the time in which they do not receive treatment - for example, when they go to bed. But for maximum benefit unit must be used continuously for at least 18 hours a day - the longer, the better, according to the manufacturer.

Dr. Stuppa have a patient for whom treatment device transmits the field of tumor treatment began in 2007 and ended in 2010. "He still copes with any further treatment," - said Dr. Stupp.

As this treatment is incorporated into routine clinical practice? Outside of clinical trials, Dr. Stupp and his colleagues offer this method of treatment for each patient, which has recently been diagnosed glioblastoma. "It's part of the discussion," - he said. "One or two out of 10 say they do not want it, but most grateful for the fact that there is another option, in addition to chemotherapy," - he added.

"It takes some getting used, but those who are used to it and love it, and they are difficult to distract from the therapy," - said Dr. Stupp at Medscape Medical News.

Dr. Ramakrishna indicated that the treatment device transmitting tumor treatment field discussed in his clinic with newly diagnosed patients. "Areas of tumor treatment - is an added tool in the set of treatments, but it is not fundamentally alter the prognosis of glioblastoma," - he said.

"But then, the surgery, and radiation therapy have not changed, and the unit offers lushuyu survival compared with current options," - said Dr. Stupp.

"Despite all the restrictions, the device represents a significant advantage in survival of patients with glioblastoma that can perform stringent treatment" - Dr. Shepard said.

Researchers continue to study the energy production in cancer cells to stop their growth.

The discovery, which will help prevent the development of brain tumors in children

American scientists have discovered a mechanism that promotes the transformation of precancerous conditions in medulloblastoma.