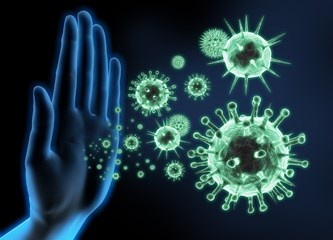 The innate immune system - is the protection that responds to infection immediately after the pathogen enters the body. This reaction takes place in two directions: cell "reports" that the body has got a foreign body, causing an inflammatory reaction, or programmed cell death of the other, to stop the spread of infection and even release signaling molecules that prevent neighboring cells.

Scientists believed these two unequal reaction. A new study led by the University of Pennsylvania suggests that this is not so. The results presented in the publication «PLOS Pathogens», show that the enzyme caspase-8, which plays an essential role in the initiation of cell death after infection of Yersinia bacteria, also regulates the production of inflammatory cytokines, signaling molecules that help the immune response.

"The activity of this enzyme is necessary for the regulation of cytokines", - said Igor Brodsky, senior author of the study and associate professor of the school of veterinary medicine.

Scientists have conducted immunological classic experiment, creating a bone marrow chimeras. Rodents were exposed, killing the bone marrow cells, and then do a bone marrow transplant from other types of mice, which allowed the animal at the same time to obtain cells with multiple genetic profiles.

Scientists have investigated how the levels of specific cytokines vary in mice with caspase-8 deficiency, and showed a reduction of cytokines associated with multiple Toll-like receptors.

"To us it was interesting because it explains why people with defects of caspase-8 immunodeficiency and why they are susceptible to a number of bacterial and viral infections of the respiratory and nasal passages, - said Brodsky -. This is a role of caspase- 8 in cell death or its important role in the expression (manifestation) of genes. "

Brodsky and his colleagues studied the enzyme caspase-8 is required for the production of cytokines. Previously it was thought that the raw form of caspase-8 was inactive, and that the enzyme has to be processed to cleave target proteins. The team used CRISPR-cas9 strategy to generate mice with caspase-8, which could not be processed.

To the surprise of researchers, although the mice were deficient in programmed cell death, they were still able to produce cytokines. Further experiments showed that the protein partner called cFLIP, works together with an untreated form of caspase-8 to produce cytokines in response to the bacteria.

In future studies, Brodsky and his colleagues hope to find out how the role of caspase-8 in inducing cytokine production is common to pathogenic microorganisms.

New approaches to the diagnosis of cancer, autoimmune diseases and many other disorders.

New possibilities for the prevention of type 1 diabetes: study oligonucleotides and miRNA92a molecule.

Communication between the immune system, brain structure and memory

As the structure of the brain and memory function associated with the genes of the immune system?

Experts insist on severe restrictions in the use of triclosan

The research team advises against the use of triclosan in household products.