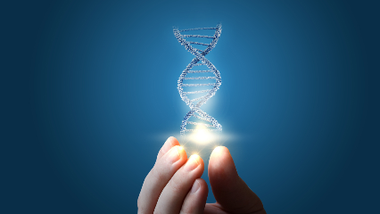 The genes contain the information necessary for the functioning of cells, tissues and organs. Gene expression is also carefully regulated by the body.

Researchers from the Center for Genomic Regulation in Barcelona, ​​Spain, in collaboration with scientists from the group of the University of structural bioinformatics Pompeu Fabra Department of Molecular Epigenetics Helmholtz Center, Munich, Germany, have made a new step in this direction - the ability to control the expression of several genes that play an important role in cancer . "We saw that the cells of breast cancer need special modification for the expression of sets of genes for cell proliferation and tumor progression, - says Priyanka Sharma, researcher and first author of the paper. - This modification allows the enzyme RNA polymerase II to overcome the barrier and continue to transcribe these genes. "

Cancer cells can proliferate rapidly, so the genes involved in cell division and proliferation, and are active tend to have a high degree of expression. Such precise mechanism involves a plurality of different molecules to function properly. In the case where all the mechanisms for gene expression of proliferation willing to wait until a specific modification. Polymerase requires the final modification to cross the barrier to transcription.

"Explanation of each step and all the components of this process is an important achievement in terms of fundamental science. Now we can better understand how to actually running a complex mechanism of gene regulation, and it may become a new target for clinical researchers studying new treatments for certain cancers, "- says Miguel Beato, team leader and principal investigator.

The work, which was published in Molecular Cell, describes a new modification to the carboxy-terminal domain of RNA polymerase II, and it deiminirovanie arginine enzyme PADI2, which allows the polymerase to transcribe genes related to the growth of cancer cells. "Most of the chemotherapy is aimed at blocking the activity of enzymes, but we know that PADI2 involved in various processes, including the nervous system, the immune response and inflammation. Thus, inhibition PADI2 will have many side effects. Our results make it possible to target only specific action PADI2 RNA polymerase required for tumor progression, without a common blocking the enzyme "- Beato said.