The drug slows the progression of smoldering multiple myeloma

Early treatment of lenalidomide significantly delays progression of smoldering multiple myeloma to symptomatic disease, according to results of a randomized study.

For information on how to carry out the treatment of myeloma in Israel,  the best specialists of the country, leave a request and we will contact you shortly. 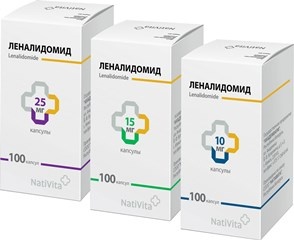 "Currently, this is the second randomized study, which demonstrated benefit for patients in the high risk category," - said Dr. Sagar Lonial of Emory University School of Medicine in Atlanta.

Dr. Lonial and his colleagues evaluated the efficacy of lenalidomide with one agent versus observation in 182 patients with smoldering multiple myeloma, medium or high risk. The primary endpoint was the progression free survival based on the progression of the disease before the onset of end-organ damage associated with multiple myeloma and biochemical progression.

lenalidomide group received orally 25 mg of lenalidomide on days 1 through 21 of each 28-day cycle, wherein the treatment (or observation) continued until disease progression, toxicity or cancellation for other reasons.

In the second planned interim analysis (median follow-up, 35 months), the frequency of partial or better response rate was 50% in the lenalidomide group compared with the non-response in the observation group, the researchers report in the Journal of Clinical Oncology, online October 25th.

There were two deaths in lenalidomide group and four in the observation group (hazard ratio, 0.46; 95% confidence interval 0.08 to 2.53).

The use of lenalidomide was evident in all risk groups, but is most pronounced in patients with high-risk patients.

"For high-risk group using the new criteria Mayo 2018 (20% plasma cells, M-protein 2, the ratio of free: light 20>), they should offer a trial treatment or lenalidomide or lenalidomide / dexamethasone as a treatment", - said d -R. Lonial said.

Dr. Ola Landgren, Chief of myeloma treatment in Oncology Center "Memorial Sloan Kettering" in New York, said: "It is not clear why the study should be conducted only with lenalidomide, given that the drug is always supplied with dexamethasone for the treatment of multiple myeloma (Office for FDA The food and Drug Administration (FDA), approved in 2003). Over the past few years have been published / presented several new research showing that combination therapy with 3 drugs - always including lenalidomide - can lead to long-term answers to the same category of patients (high-risk smoldering myeloma). "

"In 2019 there was no FDA-approved treatment smoldering myeloma", - she said. "Lenalidomide approved by the FDA only for the treatment of multiple myeloma."

"The main task for the future are: a better understanding of the genomics of early myeloma, allowing better define the optimal time for treatment of disorders of clonal plasma cells in the earliest stages when the probability of eradication of the above", - said Dr. Landgren. "Using modern combined therapy with modern monitoring response to therapy (r. F. Testing of minimal residual disease (MRD)) paving the way for therapeutic strategies for patients with impaired in plasma cells".

Dr. Maria Victoria Mateos of the University Hospital of Manteca Salamanca / IBSAL in Spain, which explored various aspects of multiple myeloma and its treatment, said: "Patients with asymptomatic myeloma with high risk of progression of myeloma should be treated. The data that we have today, confirm the use of lenalidomide or lenalidomide-dexamethasone. "

"There are ongoing attempts to evaluate some other options other therapies, similar to those we used in patients with active myeloma," - said Dr. Mateos.

Treatment of cancer of the blood in Israel

Treatment of cancer of the blood in Israel offers Assuta Hospital. Private hospital is one of the best international hospitals. Reasonable prices, rapid clearance guaranteed.