Disclosure of the genetic causes of skin cancer

Squamous skin cancer - the second most common form of cancer in the United States. He has the highest mortality rate among all non-melanoma skin cancer diseases. Approximately 2-5% of patients, this type of cancer metastasizes and spreads throughout the body, making it difficult to cure. 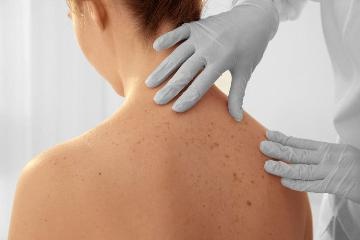 Scientists from the American University help to identify genetic factors that lead to squamous cancer. Recently, they have shown how the interaction between cell signaling pathway Tpl2 MET gene and contributes to the progression of skin cancer. Their results indicate the potential therapeutic "target", targeting that can help patients with advanced squamous cell carcinoma, which can not be treated by radiotherapy or chemotherapy.

"It is important to understand the biological mechanisms of disease development - the researchers noted -. The incidence of all types of skin cancer has increased dramatically over the past few decades, but still little is known about the genetic causes that lead to the development or progression of these diseases. "

Using animal models, the researchers examined how to develop skin cancer. In 2011, they showed how the loss Tpl2 increases susceptibility to the development of skin tumors. In this study Tpl2 was deleted in mice. Without gene in rodents developed significantly more tumors, and they were found cancer biomarkers, such as increased inflammation, transformation of skin cells in the invasive and attacks healthy cells. However Tpl2 role in the development of cancer is not clear. According to scientists, it serves oncogene for some types of cancer and other tumor suppressors, depending upon the tissue in which the signal varies. When Tpl2 squamous cell acts as a tumor suppressor.

In a new article published in «Oncogenesis», researchers conducted in-depth analysis of what's going on loss Tpl2, which leads to the transformation of benign skin tumors in squamous cell carcinoma. And it turned out that this is connected with a signal by MET.

It is known that the MET plays a role in many cancers. Its activation contributes to many different aspects of skin cancer progression, including survival, invasion, angiogenesis and drug resistance.

The owl study, the researchers treated mice with no Tpl2 kapmatinibom, a drug that is currently being tested in clinical trials for the treatment of many types of cancer, and that blocks the activation of the MET. The results showed 60% reduction of tumors in rodents. More importantly, the tumors were benign. Thus, the researchers concluded that the lack of Tpl2 gene leads to overexpression of MET, and this is partly the reason for the development of squamous cell carcinoma.

As receptor METigraet an important role in the development of squamous cell skin cancer, but it also has a "helpers". In future studies, researchers will examine the link between MET and other receptors to better understand its aberrant signaling.

Cell signaling pathways are complex. Patients with advanced cancer are often treated with drug cocktails to prevent the spread of tumors throughout the body. "But it can be like a game of" Kill the mole "... When a protein is removed, it may cause the payment and receive another participant. We need to understand the interaction between different proteins. Thus, we can determine how best to deal with the development and spread of cancer, including squamous cell carcinoma "- the researchers reported.