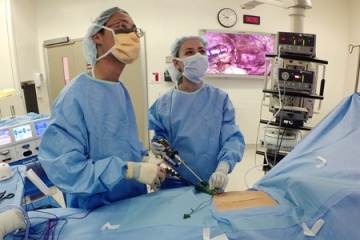 The researchers report that the highly sensitive method of cell-free DNA sequencing (cfDNA) allows the simultaneous determination of the status of microsatellite instability (MSI) and genomic biomarkers for solid tumors in the plasma.

Clinical Practice Guidelines of the National Network of multidisciplinary oncological institutions recommend using MSI as a biomarker for the nine types of cancer (at least). MSI-testing is most often carried out using polymerase chain reaction (PCR) and / or immunohistochemistry (the IHC) analysis of samples of tumor tissue, but recent studies have shown that the next-generation sequencing (NGS) accurately describes the status of microsatellite instability in tumors.

Information on how for to the carry out the treatment of cancer in Israel Assuta the Specialists: best of the country, a leave a request and will of <br> we contact you shortly.

Now scientists from Guardant Health company and their colleagues describe the development and testing of acellular MSI evaluation on platform circulating tumor DNA (Guardant360), consisting of a previously approved panel of 74 genes.

Analytical sensitivity tests, scientists have found that 95% MSI detection limit is 0.4% when the input signal is 5 ng, and 0.1% at 30 ng input signal.

Researchers have identified 87% high tissue MSI status and 99.5% tissue with a stable status of microsatellites in evaluable patients with total accuracy in 98.4% (934/949 samples) and positive predictive value of 95% (71/75 samples).

When researchers have used the algorithm MSI to more than 28 000 consecutive clinical samples of patients with advanced cancer, tested in their laboratories, 278 samples including 16 different tumor types have been identified as having a high MSI status that was similar to the overall prevalence of about 1%.

Defining MSI status by cfDNA also predicted immunotherapeutic response patients. Ten of the 16 participants with metastatic gastric cancer that had revealed a high rate the MSI, reached a total (three patients) or partial (seven patients), objective response, including three additional patients with stable disease who were treated pembrolizmabom or nivolumabom after the "failure" of standard chemotherapy.

"We have developed and approved for targeted NGS panel based cfDNA, which accurately assesses the state of the MSI, and provides comprehensive genotyping of tumors, allowing for complete testing of the tumor with high sensitivity, specificity and accuracy. Such simultaneous characterization of the status of MSI and the genotype of the tumor using a simple capture of peripheral blood has the potential to increase access, as targeted therapy and immunotherapy of all patients with advanced cancer, including those for which current testing paradigm on the fabric basis does not fit "- the researchers reported.

Chemotherapy in Israel is used as an effective treatment for various cancers. Assuta Hospital offers treatment abroad at affordable prices.