According to a retrospective study, the indicators of the original total thyroidectomy and completion thyroidectomy for well-differentiated thyroid carcinoma decreased since the introduction of the updated recommendations of the American Association of thyroid 2015.

For information on how to carry out the treatment of thyroid cancer in Israel, the best specialists of the country, leave a request and we will contact you shortly. 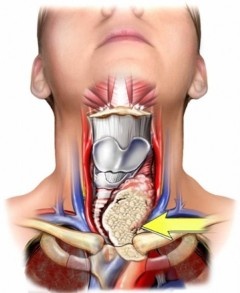 Dr. Nir Hirskhoren Medical Center Hadassah-Hebrew University, Jerusalem, Israel, and colleagues compared the total thyroidectomy, lobectomy thyroid and completion thyroidectomy before and after the introduction of the updated recommendations in their tertiary medical center.

Among the 169 patients included in their final analysis, 118 were processed before the updated guidelines and 51 were treated after the updated recommendations.

The level of primary total thyroidectomy significantly reduced from 61.0% before 2015 to 31.4% after the introduction of the updated recommendations.

There was a slowdown in the completion thyroidectomy in patients who underwent the first lobectomy thyroid gland (from 73.9% to 20.0%), the researchers report in JAMA Otolaryngology-Head & Neck Surgery, on 29 March.

Dr. H. Zygmunt Krukowski from the University of Aberdeen, UK, studies of thyroid cancer , told Reuters Health: «The total thyroidectomy and radioactive iodine therapy are excessive therapy for many patients, and this document accurately assesses the potential impact of the implementation of recent recommendations ATA».

"One of the most interesting aspects - is the power of the guidelines that affect the practice, even when the quality of the evidence underlying the recommendation is weak," - said Dr. Krukowski, who was not involved in the study. "Recommendations for thyroid cancer is uniquely susceptible to this criticism because of the total absence of prospective randomized trials on survival. At its core, a good prognosis and long-term natural history of this tumor is compared to the more common and aggressive cancers means that there is no high-quality evidence and recommendations on the basis of short-term, often expected outcome. "

"Patient choice is crucial in this area, but it is difficult to make an informed choice", - he explained.