Scientists have discovered the secret of heart disease. Thank you Thai water beetle! 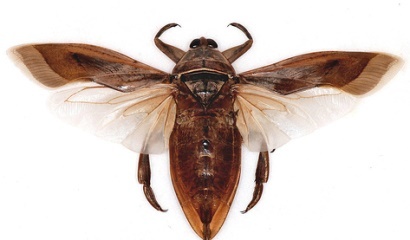 Cardiovascular disease began to study for a long time, but scientists continue to look for ways to help in the treatment of these diseases.

Despite the fact that this is just a popular fried delicacy in Thailand, the researchers argue that the modest insect helps them to study human muscles, including the heart.

Early work shows that insect muscles used for flight, reduced almost to the same rhythm as the mammalian heart.

Mutations that lead to heart disease, have been identified previously, but difficult to study in mammals. With the help of an electron microscope, scientists have made the first in the world of 3D-image of tiny muscles that uses Thai beetle in flight. These muscles are made of protein myosin, which provides the necessary energy for the insect. individual molecules for the first time in the muscle fibers were examined in a relaxed state.

The photographs respond to the many questions about the myosin filaments, the answers to which scientists have been seeking for decades.

The muscles contain two types of filaments: myosin and actin. Myosin filaments consist of a long rod and a molecular motor. Numerous rods form the basis of the muscle fibers. During the reduction of molecular motors grasp muscle actin filament. This process is accompanied by a certain force, and myosin rods must be strong enough to withstand it.

The study of insect muscle fibers will help researchers make breakthrough in the treatment of cardiomyopathy and kardiomiopaticheskih mutations. Currently, scientists are trying to enlarge the image of the tiny muscles of Thai water beetle in order to better consider how amino acids interact with each other. Thus, a tiny insect - a clue to serious heart disease.

Based on materials techtimes.com

The first of three billion heartbeats begins earlier than we thought

As the first heartbeat influence its development? Scientists conducted the study, which will help prevent fetal heart disease.

Sudden death has reminded doctors about the exact medicine

Incorrect interpretation of the results of genetic testing has led to a misdiagnosis.

If patients with depression after heart surgery attend a rehabilitation course, the risk of death is reduced.