Immunoreceptor revealed that promotes the growth of cancerous tumor 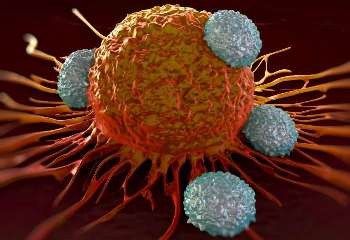 Cancer immunotherapy improves the functioning of the immune system, helping to fight the tumors. This is a developing area of ​​research and medicine, and in clinical trials carried out several types of immunotherapy.

Now, a research team from Imperial College London found that in a mouse model of liver cancer one immunoreceptor promotes the growth of the tumor, rather than delaying it.

Scientists believe that this has implications for immunotherapy in the fight against human cancers caused by inflammation, such as liver cancer and colon cancer. The study, funded by the Wellcome Trust, is published in Nature Communications.

According to Dr. Nadia Guerra, immunotherapy has shown success in treating cancer patients with advanced forms of cancer, particularly metastatic melanoma. These methods are tested on various types of cancer and are developing rapidly. Nevertheless, there is a problem on optimization of these therapies and reduce adverse effects.

Part of the immune system, which is studied in the study, called NKG2D. Immunoreceptor NKG2D is a type (molecule present on the surface of immune cells), which detects signals from cells.

If a normal cell is infected with a virus on its surface will be molecules that NKG2D-immunoreceptor can detect. The immune cells destroy infected cells.

Ten years ago, Dr. Guerra first showed that this mechanism works against cancer . This was demonstrated by the fact that tumors grow faster in mice with suppressed activity of NKG2D.

However NKG2D promotes inflammation and have been found to play a role in chronic inflammatory diseases such as Crohn's disease. In this case, the NKG2D skips normal and not damaged cells. A team of scientists examined whether NKG2D can affect the growth of cancer using the murine model of liver cancer. NKG2D receptor in human and mouse are similar, so the results are similar to human liver cancer.

They found that tumors develop rapidly in mice with NKG2D. «NKG2D - an effective anti-tumor agent, but we have found that it can have the opposite effect in tumors that arise and / or rise in chronic inflammation," - says Dr. Guerra.

Liver tissue is damaged and continuously recovered, since it is involved NKG2D, that develops genetic mutation.

"The paradoxical effect of the NKG2D, which we found reveals the need for a selective treatment of immunotherapy based on NKG2D. What is useful in the fight against one type of cancer, has the opposite effect in another, "- said Dr. Guerra.

Relapse liver cancer can be predicted by the protein level

The relevance of the research. Results. Possible application prospects.

A diet high in animal protein can lead to liver disease

Results of the study show that animal protein is associated with NAFLD in older people who are overweight.