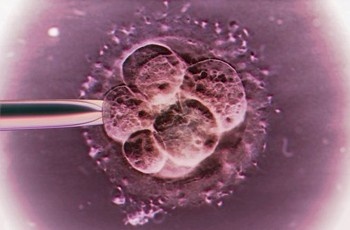 Women who are interested in the treatment of infertility, can use frozen embryos for fertilization. A sensational statement was made professor at Pennsylvania State University (University of Pennsylvania) Richar Legros. Patients with polycystic ovary syndrome, in which there is a violation of menstrual periods and lack of ovulatory activity can achieve success more likely, if he uses the product of the cryogenic industry. Perfectly preserved in the cold embryo is introduced into the body of the uterus for pregnancy.

Women with high blood levels of androgens got a real chance to cheat physiology. In comparison with the classical method of fertilization of innovation showed 49% success rate to 42%. However, the risk of a sharp rise in pressure puts a big question mark over the application of the method, as it can cause the death of a newborn.

The use of live embryos recognized in vitro fertilization (IVF). But studies have demonstrated that when polycystic ovaries chances of successful pregnancy is increased with the introduction into the uterus of frozen counterparts. It should be noted that this approach to fertility reduces the likelihood of onset hyperstimulation female gonads, the ovaries at which exhibit tenderness and swelling of tissues.

There are plans to expand the selection of women for the study of a new fertilization techniques. Initially, the experiment was attended by more than 1500 Chinese women with polycystic ovary syndrome, who have previously IVF has not given positive results. The number of abortions decreased from 33% with classical IVF to 22% on new fertilization technology. Furthermore, an innovative method showed less incidence of hyperstimulation syndrome - 2% versus 7% obtained previously.

It was not without complications. Due to the high pressure killed 4% imposed frozen embryos compared with 1% when administered to the living. Furthermore, 5 infants died when IVF safely all infants were born. Research will be continued.

The Japanese invented the app on your smartphone, with which you can examine the quality of sperm for fertilization.

Norway has the lowest proportion of women consuming alcohol during pregnancy.

Pre-eclampsia: a study of the economic costs of the disease at

The researchers assessed the costs of pre-eclampsia, a dangerous disease in pregnancy.

Only 30 percent of pregnant women receive the recommended daily intake of omega-3.