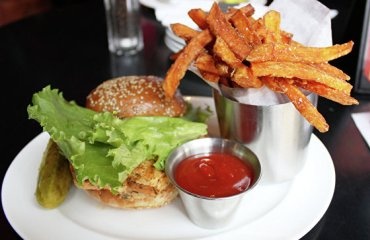 A new study shows how fat that is rich Western diet, in combination with genetic factors may lead to the spread of malignant tumors of the prostate. (astreated prostate cancer in Israel). His results were published in the journal «Nature Genetics» and «Nature Communications».

It is known that the Western diet contributes to the progression of malignant prostate tumors. There have been many studies confirming the link between this diet and the development of prostate cancer andcolorectal cancer. One found that men who follow a Western diet have twice the risk of developing prostate cancer compared with those who are on a diet rich in fruits, vegetables and whole grains.

In the new study, the researchers studied the genetic "culprits" of why cancer spreads, and found further evidence that the western diet is managing the development of the tumor.

Scientists knew that the gene PTEN suppresses tumor. Animal studies have shown that it is not when the cancer begins to spread. However, the loss of this gene is not enough to cause metastasis.

The researchers analyzed the available genomic data on tumors to see if there is another gene that is "cooperating" with PTEN and effect on metastasis.

They found that the PML gene, inhibits tumor was contained in tumors of the prostate, which do not metastasize. But it was not in the tumors, which spread throughout the body. Furthermore, about 20% of tumors that metatsazirovali lacked both genes.

It is important to note that the analysis of metastatic tumors, researchers found that their cells produce abnormally high amounts of fat.

"We have found the so-called switch oil production" - the scientists noted. They suggested that if there is a switch, it is possible that there is a drug that can block it and thus prevent metastasis of cancer.

The researchers used a cure for obesity (fatostatin) in mice that were on a normal diet rich in plant-based foods. The drug blocked lipogenesis, and the tumor regressed and did not metastasize.

Western diet may lead to metastasis

However, when the scientists increased the amount of fat in the diet of mice that mimics the western diet, the tumors become metastatic rodents.

These data suggest that a diet high in fat is a non-genetic factor in the development of metastatic prostate cancer. The findings open the way for new treatments - for patients with metastatic tumors can help, if you deprive tumors of fat. This can be done by using drugs that block the fat, as well as through dietary interventions.

As alkaline diet acts on the body

Alkaline diet brings many benefits to the body, especially in cases of kidney disease.

A diet high in animal protein can lead to liver disease

Results of the study show that animal protein is associated with NAFLD in older people who are overweight.