Liquid biopsy for the diagnosis of cancer

Colonoscopy and mammography are important for the treatment of cancer. By themselves, they do not diagnose cancer, only a doctor's opinion that they show the deciding vote. Another type of diagnosis - is a liquid biopsy, which detects DNA fragments of 150 nucleotides originating from oncogenes and tumor suppressor genes - "circulating tumor DNA» (ctDNA) For the first time such an analysis has been approved by the Food and Drug Administration. in 2016 for the diagnosis of patients with metastatic non-small cell lung cancer. 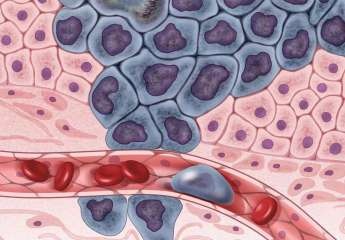 Compared with conventional liquid biopsy biopsy helps detect recurrence and to identify new mutations is less painful. A study published in PLOSOne in 2015, confirmed the analysis of effectiveness for people with advanced cancer. But a later analysis of the available liquid biopsies to detect recurrent metastaticprostate canceroften leads to contradictory conclusions. Tests were analyzed different parts of different genes. Should they have different results when applied to the same samples Tacna?

In a study published in Science, reveals new data on the liquid biopsy - ctDNA detection and levels of protein biomarkers. It's like a cancer screening: PSA for prostate, CEA for colorectal cancer and CA125 for ovarian cancer. The study, led by Joshua Cohen of Johns Hopkins University applies to people who already have cancer, as if the student has received the results of last year's test to see how many answers were correct.

The new algorithm combines data CancerSEEK 16 genes and 8 cancer biomarkers for determining the risk of developing solid tumors, and then adds another 31 protein and sex of the patient, to predict the development of cancer. This is important information, because the same mutation are hiding in the cells of different parts of the body. NIH funded development CancerSeek as potentially "universal" tool to be applied to various types of cancer.

The study included 1005 patients who have had or have a non-metastatic cancer of the ovary, Stomach, esophagus, colon, breast and other cancers. The results were impressive: the location of the cancer was detected in 99% of cases.

Investors are very interested in a liquid biopsy, given the forecasts in the market at $ 10 billion. But until then, until the liquid biopsy will not be decisive protection from cancer, people should not forget about the colonoscopy and mammography.