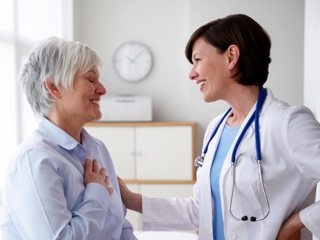 Fibroids - benign tumor that develops in the muscle layer of the uterus.

The surgery, which is performed when the uterus myoma is called myomectomy. The goal of surgery is to remove fibromatous node. The body of the uterus is preserved. As a rule, myomectomy is performed in women of childbearing age.

Depending on the degree of development of fibroids in Israeli hospitals performed:

Abdominal myomectomy - removal of uterine fibroids through an incision of the anterior abdominal wall. The operation is performed under general anesthesia.

The clinic Assuta this operation preference in cases where fibromatous nodes are large, with a diameter up to 10 centimeters. Indications for this operation are also fast growing nodes myoma compression bladder lowest location of the tumor (in the cervical region) and related gynecological pathology.

Due to the abdominal access is possible a reliable connection uterine tissue after the removal of a large fibromatous node. Imposing dual row vicryl sutures provides consistency postoperative scar on the body of the uterus and makes it possible to make a woman a child.

Abdominal access is performed in the "bikini area". The second cut - in the uterine wall.

When subserous (podbryushinnye) myoma node is not removed from the uterine wall, but closer to the tumor so as to avoid damage to the uterine body.

When intermuscular location fibroids node captured forceps and husks from the capsule. Sutured the wound bed, on the uterine wall superimposed two rows of catgut sutures.

After laparoscopic myomectomy the woman is under medical supervision during the day and in a satisfactory condition discharged home.

Operation as laparoscopic myomectomy, has a small influence invasive and gives a positive result.

Myomectomy is performed in two stages. Initially held hormonal suppression of the endometrium, which thins endomery, reduces the size of the uterus and reduces blood flow to the uterus. Then after 4-6 weeks the removal fibromatous node.

Hysteroscopic myomectomy, without scar formation in the body of the uterus, is of great importance for patients planning pregnancy.

Operation TVT-S in the clinic Assuta

The most modern and gentle way-operation TVT-S will help in the treatment of urinary incontinence in women. Forms, guidelines, patient recovery.

IVF in Israel, and the indications for the procedure, diagnostic tests, characteristics of the main 4 stages of in vitro fertilization.