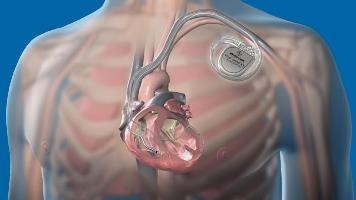 We present an interview recorded with the words of some of our patients.

Mikhail from Moscow - a review of the cardioverter - defibrillator

What diagnosis you put?

One day last year, my mother called me and said: "Sit down and do not worry We knew that the deceased sister's father was diagnosed with long QT syndrome Father checked, and gave him the same diagnosis..."

Within a month, I passed a blood test, which showed that I have the same problem. I thought about all the relatives, we buried a very early age, and it scared me. After confirming the diagnosis we started to look for a solution, looking for information on the Internet, talk with cardiologists.

How did you decide on the implantation of a CRT-D system?

A cardiologist Said That of The I of needed an Implanted a defibrillator to the reduce the high risk of Sudden cardiac Arrest. We chose to do this operation in Israel , Assuta, which is considered one of the best clinics in the country. There I was given all the information about the device, its advantages and disadvantages.

How do you feel after being implanted cardioverter?

The recovery process is normally held. In general, I took a three-week vacation. There was a little pain and discomfort of joints, but overall not so bad.

How do you feel now?

This system S-ICD does not affect how a globally on my life. The device just inside. I continue to engage in merchandising. I know that cardioverter definitely affected my family. First of all, my mother calmed down. It's kind of an airbag, which brings peace to me and my family.

People who know me well, were very surprised that it happened to me. Physical activity has always been part of my life - running, swimming, cycling.

August 19 afternoon, I played soccer, and at night I was sick, there was a very strong pain in the chest. I was taken to the hospital, the doctor slapped on the shoulder said, "Well, a heart attack."

October 8, I learned that a small segment of the bottom of the heart is damaged and it is irreversible.

As you decide on a procedure for implanting cardioverter-defibrillator?

My cardiologist told me the essence of the device. He said: "Imagine that the ambulance is always with you This guardian angel, which is located right in the chest.."

Then we decided to trust the Israeli doctors through internet search took to the medical service, which organized everything for us, carried out an operation at Assuta. In general I am satisfied with the results.

How do you feel now?

As they say my children, now I'm bionic. My life really has not changed. I am able to do all the things that I was doing before.

How did you feel when you were diagnosed?

I've always been an active child, I was involved in sports at school. Then I continued to run, struggled with being overweight. My husband, who is also a personal trainer and was told that I need to check the thyroid gland. As a result, I was diagnosed with arrhythmogenic right ventricular dysplasia.

How did you decide on the implantation of a cardioverter-defibrillator?

So I just said that it is needed. I had a feeling as if I had lost a goal in life. I thought that I was all right. We tried to create a family running together, we had fun. I had a feeling then, as if the earth went from under my feet.

Her husband helped me to "gather strength", thought and decided that it would be better to do the operation in Israel. Research online, requesting a few firms. I trust most called medical service yunims. Then we stopped at Assuta, in general I have no regrets, everything went well.

How are you feeling now, when the device is implanted?

My machine saved my life three times already. When cardiomyopathy not physically visible changes. You feel bad, but people say that you look good, as you pretend.

Previously, I had a habit of planning for five, ten and fifteen years. Now I live each day and try to look at things from the positive side. I prefer the "glass half full" rather than "half empty."

The implantation of a cardioverter-defibrillator

The implantation of a cardioverter-defibrillator in Assuta - course of the operation, the subsequent recovery, the potential risks, changes in lifestyles and medical recommendations.

Heart surgery in Israel - types of surgical approaches, readings, training and diagnosis, the course of operations, the subsequent recovery and care, the potential risks.