Assuta Medical Complex has a cardiac surgery center that offers a wide range of operations on the heart. One of them is the implantation of a pacemaker.

Even in 2011, MC Assuta JCI received a certificate confirming compliance with international standards. Offers services of highly qualified and experienced surgeons, the excellent level of service. The Center is equipped with advanced diagnostic and treatment equipment. 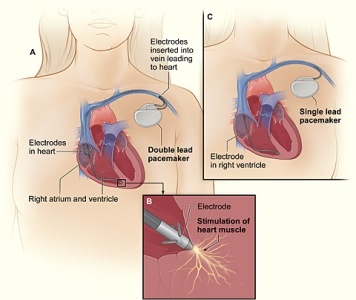 Pacemaker (synonyms - pacemaker, an artificial pacemaker) is a small device that is implanted into the chest or abdominal cavity with the aim to control irregularities in the heart rhythm.

A pacemaker is used to treat arrhythmia - problems with the rate or rhythm of cardiac contractions. In this state, the heart muscle beats rapidly (tachycardia), Slow (bradycardia) or irregular.

With this issue of authority is not able to function properly - to pump the required blood volume. This causes the following symptoms:

Severe form of arrhythmia is able to cause damage to organs, lead to loss of consciousness or even death.

Pacemaker facilitates a number of symptoms - fatigue and syncope. It also improves the quality of life - allows to renew a person with abnormal rhythms of a more active lifestyle.

human heart has its own electrical (conductive) system. Discharge originates in the upper body segment and extends to the bottom, it causes the heart to contract and pump blood.

The basis is the sinoatrial node, where an electrical signal, it synchronizes the activity of cells of the organ.

Acronym atria (the upper chambers of the heart) facilitates the movement of blood into the ventricles (lower chambers). Recent reductions pumps blood to the rest of the body. Combined reduce these chambers create a heartbeat.

The principle of operation of the pacemaker

Disruptions to electrical discharges provokes the development of arrhythmias. Pacemakers use low-energy electrical pulses to correct these problems. The device can:

The apparatus includes a battery, a generator and a computerized wire cable with sensors (electrodes) at the ends. The battery powers a generator. Wires connect the generator to the heart.

How does the pacemaker of the heart?

This device helps to identify and coordinate the body rhythm. The electrodes monitor electrical activity of the heart and transmit the data over the wire to the computer in the generator.

If violations are detected, the computer sends electric shocks to the body. They go over the wire and reach the heart muscles.

Pacemakers can recognize and store information about the electrical activity and rhythm of the heart muscle. Newer models are able to control blood temperature, respiration rate, and a number of other factors. They can also regulate your heart rate when you change the type of activity.

Doctors use this information as much as possible to configure the device effectively. The process computer programming occurs through an external device without requiring direct contact with the pacemaker or the use of needles.

The device can be temporary or permanent. Temporary pacemakers are used for short-term problems - with a slow heartbeat caused by a heart attack, surgery or excessive medication.

They are used in emergency situations. For example, when a physician can implant a permanent pacemaker until a temporary condition persists. In such cases, the patient is in the clinic until the device is placed in the body.

Permanent pacemakers are designed to address long-term problems. In this article, the focus is directed to this type of device.

Doctors also treat arrhythmia by another device implantable cardioverter-defibrillator. It is similar to an artificial pacemaker, but has the ability to create high-energy pulses for the treatment of dangerous arrhythmias.

Pacemakers - a single-chamber, two-chamber and three-chamber

This device has one to three wires, which are arranged in different chambers of the heart.

There are two basic types of programming the device "on demand" and "partially-adaptive" pacing.

The first option monitors heart rhythm and sends a discharge in the case if the body is beating too slowly or miss a beat.

When partially adaptive elektrokadiostimulyatsii device accelerates or slows the heartbeat in accordance with the activity of a person. To do this, the device monitors the speed of sinus, respiratory, blood temperature and other factors that determine the level of activity.

A doctor at Assuta will work with the patient to determine what type of programming is optimal for a particular application.

Indications for the installation of the pacemaker

Doctors recommend this product for many reasons. The most common:

The reason for the blockade may be:

When putting a pacemaker of the heart?

Your doctor may recommend implanting the device in the following situations:

In some cases, put a pacemaker in the heart yet?

Doctors in Assuta can recommend this product to people who have certain types of congenital heart disease, or those who have had organ transplants. Children, teenagers and adults can use heart pacemakers - contraindications no age.

However, before you make a decision and make recommendations, your doctor will consider the arrhythmia symptoms - dizziness, unexplained fainting or shortness of breath. Explore the history of the disease, the treatment carried out previously (medication), the survey results.

Diagnostics before you install a pacemaker in Assuta Many tests are used to detect arrhythmias. one or more surveys described below may be conducted.

The electrocardiogram records the electrical activity of the heart muscle; shows how fast it beats; It recognizes the rhythm, strength and duration of electric discharges that pass through the heart. The test helps to identify bradycardia and heart block (the two main reasons that required pacemaker). However, it has limited functions - captures the heartbeat for only a few seconds, only to diagnose arrhythmias that occur at the time of testing.

For the coming and going of the problems with the heart rhythm using a portable ECG monitor - Holter and event monitor. Holter records for 24-48 hours while it is worn with a. event monitor expands even more possibilities - you can record 1-2 months. Many event monitors have a function - to record the electrical activity only at the symptoms, the person presses the button and starts the device. Or the monitor can be switched on automatically when detects the abnormal heart rhythm.

By using sound waves, echocardiography creates moving images body, visualizing the size and shape of the heart. It determines how chambers and valves are working well.

Electrophysiological examination of the heart (EFI)

In this test, the physician passes through a vein in the groin (the upper part of the thigh) or arm and a thin flexible wire (catheter) to the heart. He fixes the electrical discharges, as well as stimulates the body with them. This makes it possible to reveal the answer to the heart's electrical system to detect the injury.

Certain diseases are easier to find if the heart is functioning actively. During the stress test the patient is trained by forcing the body into overdrive. If the load contraindicated drugs may be used to increase the heart rate.

Pacemaker placement requires a minor surgical procedure. Preoperatively dripper is installed, through which the body goes medicine. Your doctor may also introduce an anesthetic to a place where they will put the pacemaker. More likely to be prescribed antibiotics to prevent infection.

First the doctor in an artery in the shoulder area, opposite the dominant hand, puts a needle to draw the wires of the pacemaker and correctly place them in the heart. The whole procedure is performed under X-ray control. After placing wire doctor will make a small incision in the skin in the chest or abdomen. Pacemaker further comprising the battery and generator is introduced just below the skin, is connected to the wires.

The doctor then checks the operation of the device, and sutures the incision. The whole operation takes only a few hours.

Rehabilitation after the installation of a pacemaker in Assuta

Rehabilitation after the installation of a pacemaker, potential complications, limitations in lifestyle, questions from our patients and their answers.

Stories and reviews of the heart pacemaker, prices

Heart pacemaker - price, patient testimonials about the operation and life of the pacemaker.