Chemotherapy for melanoma in Assuta

Chemotherapy for melanoma is commonly used to treat common forms of the disease. This method involves the use of anticancer therapy (cytostatic) drugs to combat oncology. As a general rule, carried out systemic therapy, drugs which affect the entire body, circulate through the bloodstream and destroy cancer cells, including secondary foci. There is also a regional form of treatment, the effect of which is directed to a specific region of the body.

For of melanoma Chemotherapy Helps control the symptoms of SLOW or the progression of the disease. The indications for it are:

Selection of medication and dosage schemes depending on the individual characteristics of the disease and the health of each patient. 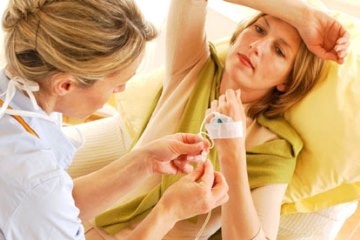 The most common drugs that are prescribed to treat melanoma include:

These medicines may be used in certain combinations, but clearly it is not clear which one is most effective therapy for the purpose of the particular disease. Chemotherapy with melanoma and in some cases is combined with a biological therapy (biochemotherapy).

Drugs in this type of treatment received directly into the blood vessels in the arm or leg, providing a higher concentration of drugs. Regional chemotherapy prescribed for metastases in the lymph nodes of multiple tumors in the arm or leg.

It is carried out in several stages, typically under general anesthesia. In addition, the intended stay in the hospital for 7-10 days. These procedures are performed only in specialized centers.

This procedure involves carrying out the following steps:

The most common medications used in regional chemotherapy for the treatment of melanoma in Israel, is melphalan (Alkeran, L-PAM).

Side effects of chemotherapy for melanoma

The negative effects of treatment occur while taking all chemotherapeutic agents. They acquire pronounced at higher doses and increase in the course of treatment.

Serious short and long term complications can occur and vary depending on the particular drug. These include the following:

Treatment side effects of chemotherapy for melanoma

Drugs known as serotonin antagonists, especially ondansetron (Zofran), are able to relieve nausea and vomiting in almost all patients treated with mild drugs, and the majority of patients who were given more powerful dose.

Erythropoietin stimulates the production of red blood cells and may reduce or prevent the development of anemia induced by chemotherapy. It is available as epoetin alfa (Epogen, Procrit) and darbepoetin alfa (Aranesp). Aranesp is present in the bloodstream longer than epoetin alfa, requiring fewer injections.

Diagnosis of melanoma in Israel