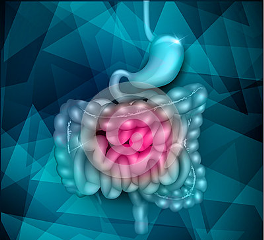 Small intestine is part of the digestive system and is located between the stomach and the colon. It consists of three main parts: the duodenum, jejunum and ileum.

Authority has many folds to fit inside the abdominal cavity and the length of about five meters. He is responsible for the breakdown of food, it provides a process of absorption of vitamins, minerals and other food components.

The types of small intestine cancer

Sometimes cancer of the small intestine may be secondary. This means that it has spread from another primary tumor in the body. Next, consider the information that concerns mainly adenocarcinoma.

Causes and risk factors for cancer of the small intestine

In most cases the cause is unknown. Risk factors for small intestine cancer include Crohn's disease, celiac disease, Peutz-Jeghers syndrome.

People who have had cancer of the colon or rectum, or have hereditary nonpolyposis colorectal cancer have an increased probability of occurrence of this disease.

Symptoms are often vague and difficult to diagnose.

The symptoms of small bowel cancer may include:

These symptoms are related also to other diseases and require binding and accurate diagnosis.

Sometimes cancer can become a cause of bowel obstruction, which may be complete or partial. Symptoms are vomiting, constipation, aching pain and bloating.

In some cases, the obstruction can lead to rupture of the intestine. It develops suddenly, requires surgery. Symptoms include severe pain, shock, drop in blood pressure and bloating. 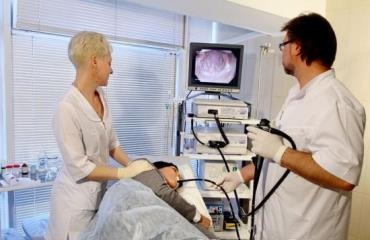 The Assuta Hospital doctor first polls in the general health status of past illnesses. Are examined, checked liver, donate blood and stool tests. It can be assigned to chest X-ray to check the condition of the heart and lungs. The following types of surveys aim - to diagnose cancer of the small intestine.

These tests allow the doctor to examine the duodenum and upper jejunum (endoscopy) or the lower part of the ileum (colonoscopy). The patient is given a mild sedative. Applicable endoscope which is introduced through the mouth, dropping down to the intestine, or colonoscope into the colon. This equipment allows you to identify any abnormal area.

If necessary, a small sample of tissue is removed for further study - carried out a biopsy. Unfortunately, not always possible to reach some areas of the jejunum or ileum, so look for tumors is required other types of surveys.

This test creates a picture in full the entire digestive tract, including the small intestine.

The patient swallows the capsule of a large size tablet. Inside it is the camera, battery, light and the transmitter. The camera takes two shots per second for eight hours. Photos are sent to a small recording device, attached to a belt around the patient's waist you.

The day before and the day of the test you need to follow a special diet. Detailed instructions the doctor gives you. The patient is engaged in normal activities.

After eight hours, after ingestion of the capsule recorder returned to the clinic. Photos uploaded to a computer to view them, a doctor. The capsule is disposable and normally excreted naturally. If all of a sudden it does not, may require surgery to remove it.

It is performed in the X-ray department of the clinic. For this test, it is important that the bowel was empty. Therefore, the pre-patient give instructions the day before the survey, to take a laxative and drink plenty of fluids to help empty the bowel.

On the day of the X-ray will be impossible to use liquid or food. Drunk liquid barium, which will help to find any abnormalities.

Within two days after diagnosis stool can be white, barium thus exits from the body. In addition, it can cause constipation, so it may require a mild laxative intake.

MRI of the small intestine

This type of diagnosis reveals tumor formation, the contrast makes it possible to install it benign or malignant nature. It detects cancers at an early stage.

Sometimes it is difficult to get a clear picture of the small intestine cancer. It is not always a decision to carry out a biopsy, diagnosis can be made during the operation.

The term used to describe the step size of the tumor and its spread beyond the initial focus. After determining the type and stage of cancer, doctors choose the most appropriate treatment in the clinic Assuta.

The disease can spread in the body through either the blood or the lymphatic system, the last part of the protection against infection and disease. Doctors check the lymph nodes near the small intestine, to set the stage of the disease.

Cancer found in the lining of the small intestine and spread to the abdominal muscles.

Disease penetrated muscular wall and may affect other nearby structures, such as the pancreas.

The tumor was struck by a number of lymph nodes are located.

The disease has spread to adjacent lymph nodes and other organs such as the liver or lungs.

The return of cancer after treatment is called a relapse.

Treatment of adenocarcinoma of the small intestine due to a number of factors - the general condition of health, position and size of the tumor and spread of malignancy to other organs and tissues.

Before you have any treatment your doctor will give the patient full information about what it involves and explain the objectives.

Surgery for cancer of the small intestine

Surgery is the main treatment of intestinal cancer in Israel. It can be used to remove diseased sections of the intestine, as well as obstruction.

Often it is possible to completely remove the tumor during surgery, but, unfortunately, not always. Localization of malignancy in the intestine and its distribution will determine how extensive the surgery is. You may have to remove part of the stomach, colon, gall bladder, or nearby lymph nodes.

Usually, the intestines can connect again after resection of the affected segment - to create an anastomosis. If for some reason this is not possible, the end of the intestine to the abdominal wall of the output surface of the skin, creating astoma. This procedure is known as an ileostomy. The patient will have to wear a Colostomy bags. Typically, a temporary ileostomy is, and further connected intestine after several months. It happens very rarely constant.

If the tumor is too large and causes obstruction of the small intestine, sometimes create a workaround. The main objective in this case - to alleviate the symptoms, when it is impossible to completely resect the cancer.

Sometimes it happens, the surgeon does not know what exactly will be done until the start operation.

After surgery, the patient enters intensive care unit, where a couple of days, and then it is transferred to a general ward.

In connection with the removal of part of the small intestine, the patient may need a special diet, dietary supplements or drugs. This depends on the volume operation, the main goal - to facilitate the digestion and absorption of nutrients. The doctor will give a detailed explanation on the matter.

Radiation therapy is a cancer of the small intestine in Assuta

Radiotherapy uses ionizing radiation to kill cancer cells. Irradiation is rarely used in the treatment of this disease. It may designate after surgery or in conjunction with chemotherapy.

Chemotherapy is a cancer of the small intestine in Assuta

cytostatics treatment is not often used in this diagnosis. Combined with radiation therapy or surgery, or recommended as monotherapy.

In most other drugs used fluorouracil (5-Fu), oxaliplatin (Eloxatin®) and irinotecan (Kampto®). The effectiveness of this method are still studied in clinical trials.

Reviews for the treatment of small intestine cancer in Israel

Testimonials help other people to decide on treatment in another country. Often, such a step is necessary, since Russia is not always the conditions for treatment, are needed.

"We went with her husband in Assuta for treatment. I liked the fact that all were very caring and treated us with respect, and most importantly helped us get well. Now we are on the remission of the Israeli doctors."

Professionalism Assuta Hospital doctors, their knowledge and experience, the use of modern technology and medical technology will provide the best results of treatment of small intestine cancer in Israel.

Chemotherapy for bowel cancer in Assuta

Colon Cancer Chemotherapy: indications for use, the most common cytostatic agents, and combinations thereof, chemoembolization, the main side effects and measures to reduce them.