Treatment of lung cancer depends on the type of cancer (small cell or non-small cell), the size and location of tumor spread in the body and overall health of the patient.

With the patient in the clinic Assuta in the treatment of lung cancer team of highly qualified specialists working in Israel. Developed treatment options, doctors give advice, but the final decision is made by the patient himself.

The main treatment options include surgery, radiation and chemotherapy. Depending on the type of cancer and its stage, the methods are combined.

The treatment program is non-small cell lung cancer in Israel

If this type of tumor is limited to one lung and the patient as a whole a good general state of health is likely to hold a surgery to remove a malignancy. It may be followed by a course of chemotherapy to destroy any remaining pathological lesions.

If surgery is not possible (for example, there is an increased risk of complications), we recommend radiation therapy. In some cases, it may be combined with chemotherapy.

If the cancer has spread, surgery or radiation therapy are ineffective, chemotherapy is usually given. When the disease is resumed growth after a primary treatment chemotherapy, another course is selected drugs.

Sometimes, an alternative method may be chemotherapy or biological targeted therapy.

The program of treatment of small cell lung cancer in Israel

This type of cancer is usually treated with chemotherapy or in combination with radiotherapy. This can help extend the life of the patient and relieve symptoms.

Surgery is usually not used. Often this is due to the fact the cancer has already spread to other areas of the body by the time when I was diagnosed. However, if the disease is detected at an early stage, surgery may be performed. In these cases, chemotherapy or radiation administered after surgery to help reduce the risk of recurrence.

There are three types of operations in this disease:

Operations preceded by a series of tests to check the patient's overall health and lung function. Diagnosis may include electrocardiogram (cardiac output) and spirometry (measurement of the inhaled and exhaled air through the lungs).

As the operation is in the treatment of lung cancer?

The operation is usually performed through an incision in the chest, the fragments are removed, or completely lung lesions. Can also be resected lymph nodes adjacent if there are suggestions that the cancer could spread to them.

Sometimes an alternative to this approach is the Video-thoracoscopic surgery (VATS). Surgery is performed through several small incisions with a fiber-optic camera, a transmitting image to the monitor.

The period of hospitalization in the postoperative period, typically from 5 to 10 days. However, to fully recover the patient will take several weeks. To prevent complications, such as, for example, blood clots, require a feasible exercise, as soon as possible. Walking and swimming are later recommended for most people, after lung cancer.

As with all surgery, lung surgery carries a risk of complications. They can be treated with medication or other surgical interventions:

Radiotherapy in the treatment of lung cancer in Israel

The intensive course of radiotherapy, known as radical radiotherapy, is prescribed for non-small cell lung cancer, if the patient is healthy enough for surgery. At very small tumors use a special kind of radiation, known as stereotactic radiation therapy instead of surgery.

Radiation therapy (palliative) can also be used to control symptoms and slow the spread of the disease, when cure is no longer possible.

Type radiotherapy, known as prophylactic cranial irradiation, are sometimes used in the treatment of small cell lung cancer. Brain processing carried low radiation dose. This is a preventive measure, because there is a risk of spread ofcancer in this area.

In the treatment of lung cancer in Israel can be applied to the following types of radiation therapy:

Radical radiotherapy is usually given five days a week with a break for the weekend. Each session lasts 10-15 minutes. The course lasts four to seven weeks.

When palliative irradiation must be from 1 to 5 sessions.

Side effects of therapy include:

Side effects should pass after the course is completed.

Chemotherapy uses medications (cytostatics) for the treatment of cancer. This method is used:

Chemotherapy is usually given cycles: taking medication for a few days, then a break for several weeks for recovery from the effects of the treatment.

The number of cycles of chemotherapy will depend on the type of lung cancer. Most patients require four to six courses of treatment for 3-6 months. 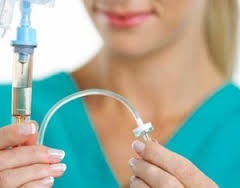 Side effects of treatment may include:

These undesirable effects must pass after the end of treatment, in addition, have the opportunity to take drugs that improve the well-being during treatment.

Chemotherapy can also weaken the immune system, making the body more susceptible to infections. It is therefore important to pay attention to the emerging signs and be sure to tell your doctor.

Other treatments for lung cancer in Israel

In addition to surgery, radiation and chemotherapy, there are a number of other methods, some of which are prescribed to treat this disease. They are described below.

Targeted drugs can be an alternative to chemotherapy in advanced non-small cell lung cancer when surgery is inefficient, or irradiation.

Used drugs such as erlotinib and gefitinib, which are also called inhibitors of growth factor, as their effect is to tackle malignant cell growth.

This method is effective only for people, there are certain proteins whose cancer cells. In order to find out whether the appropriate targeted therapy, lung biopsy is performed and the resulting sample is investigated.

Radiofrequency ablation is a new kind of treatment, which can cure non-small cell lung cancer diagnosed at an early stage.

In the course of treatment, the doctor in the clinic Assutauses a CT scanner to guide the needle directly into the tumor site. Radio waves pass through the needle, which generate heat, destroying cancer cells. The most common complication of radiofrequency ablation is a pneumothorax.

Cryotherapy is used if the tumor closes the way of breathing. This expression is known as endobronchial obstruction that can cause symptoms such as breathing problems, cough, hemoptysis.

Cryotherapy is performed as brachytherapy, except that instead of a radioactive source is placed a device known as a cryoprobe. He is able to generate very low temperatures, which help to reduce the size of malignancy.

Photodynamic therapy (PDT) may be carried out in the initial phases of the disease when the patient can not or want to apply for surgical treatment. In addition, an indication for PDT may be removal of a tumor, blocking the airway.

This treatment is carried out in two stages. Performed the injection of the drug, which accumulates in the tissues and malignancy makes its cells are very sensitive to light. To start the next phase after 24-72 hours. The tumor is irradiated with a laser. Runs photochemical reaction leading to necrosis of malignant cells.

Side effects of photodynamic therapy may include: airway inflammation and fluid accumulation in the lungs, leading to shortness of breath, throat Bole.

Prices for the treatment of lung cancer in Israel

Prices are formed depending on what stage of the disease is and what medications or procedures are required. In Israel, there are programs diagnostki that will help determine the course of treatment. All the details you will learn on the phone. Below are approximate prices for diagnosis and treatment.

Reviews for the treatment of lung cancer in Israel

To get to Israel for treatment of any type of cancer you do not need much effort. Through our service you can easily be written to the doctor. Private Cynic Assuta offers a job only a high level of doctors, so as a treat you can not doubt. Testimonials confirm the effectiveness of therapy.

"Never in my life did not smoke, and how is it that I have put lung cancer to me for a long time never came. It was very scary and treatment at my clinic in my confidence does not inspire. Decided to change something and try to recover. I learned about the clinic Assuta on the Internet. According to the reviews, it seemed the best option. For intermediaries did not want to handle, but most would be a trip to organize it would be difficult. For this very grateful to the medical service, and of course thanks to the doctors. I am now in remission and hope the disease has receded. "

Assuta Hospital has the necessary resources to provide quality care and offers a highly professional service of doctors in order to achieve the best possible result in the treatment.

You need cancer treatment in Israel? Call Assuta. We guarantee a prompt solution of health problems.