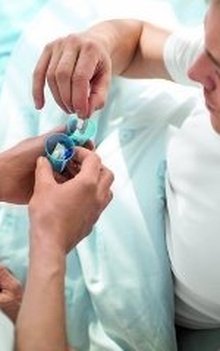 Hormones being biologically active substances, are produced in the human body to regulate its functions. They affect the cells and tissues of action in different parts of the body by traveling through the bloodstream.

Androgens - is the name for a group of steroid male hormones that control the development and maintenance of secondary sex characteristics in men. Testosterone and dihydrotestosterone are the most common androgen. Almost all testosterone is synthesized in the testis, and a small amount is produced by the adrenal glands. Cancerous prostate cells may also have the ability to produce testosterone.

How hormones contribute to the development of prostate cancer?

Androgens are essential for normal growth and function of the prostate gland, an important organ in the male reproductive system, contributing to the creation of sperm. Male hormones contribute to the growth of both normal and cancer cells by binding to and activating the androgen receptor. Thereafter, they stimulate the expression of specific genes which cause growth of malignant segments.

At the beginning of the development of cancer cells require relatively high levels of androgens to grow. This type of cancer is called androgenozavisimym treatment here is intended to - reduce the amount of androgens or block its activity, suppress the growth and development of a malignant disease.

However, in most cases, these cells become resistant, they continue to grow even when the amount of androgen in the body is extremely low.

What types of hormone therapy for prostate cancer used in Assuta?

Hormone therapy for prostate cancer designed to reduce and stop the synthesis of androgens. The following procedures, the choice is determined by the characteristics of the particular case of the disease:

Reducing production of male sex hormones in the testes

Procedures that reduce androgen synthesis in the testes, most often carried out with hormone therapy for prostate cancer . These include orchiectomy, agonists releasing hormone luteinizing hormone (LHRH) agonists, anti-androgens, estrogens.

Orchiectomy - a surgical procedure to remove one or both testicles. It can lower blood testosterone levels by 90-95%. This type of treatment is called surgical castration, it is permanent and irreversible. Subcapsular orchiectomy represents only tissue resection producing androgens, not fully organ.

LHRH agonists are administered via injection or implantation beneath the skin. Drugs approved for the treatment of prostate cancer include leuprolide, goserelin, buserelin.

When patients receive the LHRH agonist for the first time, maybe such a thing as "testosterone flare." This temporary increase in hormone level is because these drugs for a short time to stimulate the pituitary gland to synthesize excessive amounts of LH before lock it. The flash is able to degrade the symptoms of the disease that can be a problem for men with advanced disease.

LHRH antagonists in hormone therapy for prostate cancer in Assuta

Medicines called LHRH antagonists are another form of medical castration. These medicines prevent the accession of LHRH receptors in the pituitary gland, which in turn prevents the synthesis of luteinizing hormone, resulting in a decrease in the content of androgens. In contrast to LHRH agonists, LHRH antagonists, do not cause testosterone flare.

One medication degarelix (Degarelix) is approved for the treatment of a disease in later stages. It is introduced into the body via injection.

Estrogen - hormones that contribute to the development of female sexual characteristics. Although estrogens can also inhibit androgen synthesis in the testes, they are rarely used today because of the adverse effects of therapy.

Antiandrogens - drugs that compete for binding with androgen receptors, thereby reducing the ability of male hormones contribute to the development of malignant cells. Due to the fact that no anti-androgens block androgen synthesis, they are rarely used as monotherapy for the treatment of this disease. In most cases, recommended in combination with orchiectomy or LHRH agonists - the so-called combined androgen blockade or complete blockage.

In the treatment of prostate tumors administered flutamide, enzalutamid, bicalutamide and nilutamide. Their receives orally in tablet form.

Blocking the synthesis of androgens in the whole body

These drugs block the production of androgens by the adrenal glands, malignant cells and testes. Neither medical nor surgical castration does not inhibit the synthesis of adrenal hormones and cancer cells. Although the amount they produce, small, but it can be enough to support the development of malignant cells in some cases.

These drugs also called androgen synthesis inhibitors, as they lower the content of testosterone in men more so than any other known method of treating prostate cancer in Israel . They block the hormone synthesis by inhibiting enzyme called CYP17, which is found in testis, adrenal, and prostate tumor tissues. It plays a decisive role in enabling the body to produce testosterone from cholesterol.

When treating prostate cancer in Assuta apply three androgen synthesis inhibitor in the form of tablets. Two of them - ketoconazole and aminoglutethimide sometimes used as second-line treatment of this disease. Third inhibitor - abiraterone acetate - in the therapy of metastatic prostate tumors.

Types of hormone therapy for prostate cancer in Assuta Adjuvant hormonal therapy is administered after the primary treatment to reduce the risk of the disease returning. Tumors of the prostate gland in the early stages with intermediate or high risk of return after radiation or prostatectomy usually are an indication. To determine the probability of return takes into account the following factors: Gleason score, the spread of disease to surrounding tissues, the presence or absence of tumor cells in the lymph nodes.

Neoadjuvant hormone therapy is performed before other procedures. Malignant prostate tumors in the early stages with intermediate or high risk of recurrence is an indication for hormone therapy before or during irradiation. This prolongs the life of patients, as opposed to carrying out a radiotherapy.

Hormonal therapy of prostate cancer as a monotherapy

This type of therapy is sometimes used only for the palliative treatment or prevention of symptoms of the disease for localized prostate cancer, when there is a contraindication to surgery or radiotherapy. In the majority of cases are patients with limited life expectancy, with a localized tumor in the later stage or other serious pathologies.

Only hormone therapy is recommended for recurrent disease after radiation therapy or prostatectomy. It is often prescribed to patients who have a "biochemical" relapse - the rapid growth of prostate-specific antigen (PSA), especially if the PSA levels doubled in less than 12 months. However, the sharp increase in PSA does not necessarily mean that prostate cancer had returned. Therefore, conducting hormone replacement therapy in the case of biochemical recurrence is somewhat controversial.

Finally, hormone therapy for prostate cancer is used alone as the standard treatment for secondary tumor foci in the body, when he was first diagnosed. Does it increase the survival rate of men whose disease was discovered at a late stage, but there were no symptoms, while not clearly. Due to significant side effects, some patients prefer not to go to treatment, has not shown signs of the disease.

The duration of hormone replacement therapy in prostate cancer depends on the likelihood of disease recurrence, which is determined via step Gleason grading and PSA content. For men with intermediate-risk treatment duration ranges from four to six months, a high - from two to three years.

Prostate cancer often enough, initially respond to hormone therapy with LHRH agonists, LHRH antagonists or orchiectomy, as a result, may not respond to treatment. In the formation of resistant tumors sufficient lower androgen levels than in androgen responsive cancer.

Doctors can not predict how long the hormone therapy will be effective. Therefore, men being treated for several months, it is necessary to regularly check the content of PSA. Its increase may indicate cancer growth. High amounts of PSA, which continues to grow, despite the fact that hormone therapy keeps adrogenov low levels is an indication that the disease has become resistant to a given specific treatment.

What are the options for therapy-resistant prostate cancer hormone therapy?

Doctors at the clinic Assuta recommend the following methods and drugs, depending on the individual case of the disease:

Patients with hormone-resistant prostate cancer treatment receive these treatments and continue to the first line drugs, for instance, LHRH agonists, to avoid increasing the amount of testosterone that will lead to tumor progression.

What are the unintended consequences of hormone therapy for prostate cancer?

And medication and surgical castration significantly reduce the amount of androgen in the body. Because they are used by many other bodies, in addition to the prostate, develops a wide range of adverse events:

Estrogens avoid bone loss, but they increase the risk of cardiovascular events, including heart attacks and strokes. Because of these estrogens in rare cases it is recommended today as hormonal therapy for prostate cancer.

Adjuvant hormone therapy after radiation therapy impairs some side effects of radiation. Many of the undesirable effects of hormone treatment are able to grow with increasing duration of therapy.

What can be done to reduce the side effects of hormone therapy for prostate cancer?

Men which lose bone mass during prolonged treatment may be administered medications which retard and reverse active symptoms. Preparations zoledronic acid and alendronate (belong to the class of bisphosphonates) increased bone mineral density in men with this therapy. The new drug denosumab, which increases bone mass via a different mechanism was approved in 2011. However, bisphosphonates and denosumab are associated with a rare but serious side effect - osteonecrosis of the jaw.

Sexual side effects are among those with which the most difficult to fight. Drugs against erectile dysfunction, such as sildenafil citrate (Viagra®) usually do not work in men undergoing hormonal therapy because they do not affect the loss of libido (sexual desire).