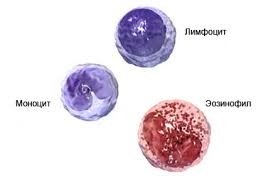 In acute myeloid leukemia white blood cells known as granulocytes or monocytes, are malignant. Usually the disease develops quickly, within a few days or weeks.

Acute myeloid leukemia - a rare disease. The risk of its development increases with age. It is the most common type of leukemia in adults. Most often it is diagnosed in older people over sixty-five years.

Researchers refer to risk factors such as:

Many signs of acute myeloid leukemia are vague and non-specific. A person may experience symptoms similar to the flu:

These symptoms are due to an excess amount of leukemic cells and a lack of healthy blood cells of all groups.

Fatigue - a consequence of the low level of red blood cells (anemia). There may also be shortness of breath.

A person can easily develop infections due to a lack of healthy white blood cells, able to fight bacteria and viruses. The disease lasts long, and difficult to get rid of it.

The lack of platelets triggers problems with blood clotting. The consequence is bleeding, bruising. In women, menstruation is very difficult to pass.

Cluster of leukemia cells in the bones, joints, lymph nodes, or due to their excessive amount causes pain and swelling.

Acute myeloid leukemia is divided into subtypes. The doctors plan cancer treatment depending on the subtype of AML.

One of the classifications is FAB - French-American-British system. leukemia type here depends on how the leukemic cells appear under a microscope as well as by antibodies to markers of abnormal cells.

M0, M1 and M2 - myelogenous leukemia, which accounts for more than half of all cases.

WHO classification divides AML into groups depending on how the cells became abnormal:

Pathologists examined leukemia cells under a microscope to determine which group of WHO or FAB belongs to the specific case of the disease. Also perform tests for specific proteins produced by abnormal cells (immunophenotyping), and mutations in the chromosomes (cytogenetic tests).

With the patient runs a hematologist, an expert on the diagnosis and treatment of blood diseases. The proposed tests may include:

In the course of treatment and after its completion will be blood tests needed. So, for example, in cases of suspected infection, the doctor prescribes a test to find out what types of antibiotics are needed to the patient. In addition, blood was taken to check the functioning of liver and kidney.

Bone marrow examination will be held at different times throughout the treatment and follow-up. test data can help:

The test is scheduled, if the donor bone marrow transplantation is considered as a suitable embodiment. With blood tests turns tissue compatibility. Leukocytes are proteins on the surface - HLA markers. Through tissue typing doctors find out how similar tissue to reduce the likelihood of rejection.

A small number of leukemic cells remaining after the treatment, the doctors called minimal residual disease. The blasts are not found in blood and bone marrow samples. To detect them using two tests.

Immunophenotyping detects proteins generated abnormal cells. These two tests show how well the chemotherapy worked, whether there is a recurrence of the disease.

The prognosis of acute myeloid leukemia

This provides the basic information for your reference. More accurate information based on individual factors capable of giving only doctor. Terms of the five-year and ten-year survival rates indicate the number of people participating in the study who were alive after 5 and 10 years after diagnosis and the therapy. In addition, it is the statistical data on which the treatment was carried out a few years ago. Every year the treatments are improving, so the treatment provides a better perspective now.

The prognosis of acute myeloid leukemia is influenced by such factors as:

The result also depends upon whether the leukemia was, which was transformed from acute chronic forms. This complicates the process of treatment.

In addition, the hard-to-leukemia therapy, which has evolved as a result of the treatment of other types of cancer. Secondary leukemia usually develops within 10 years after the first treatment of malignant disease.

Doctors even if they can not cure the disease, are able to retain leukemia in remission for several years. At relapse of AML in some cases it is possible to achieve a second remission by chemotherapy.

Age - one of the most important prognostic factors. The young body is much better at a very intense therapy.