Primary liver cancer is relatively rare, while the secondary is much more common.

In secondary liver cancer, a disease born somewhere in the body and affects the body when the cancer cells get into the bloodstream. These most common types of primary malignant diseases giving metastasis in the liver, oncology include breast,lung, Stomach , skin ( of melanoma ), colon, pancreas, the ovaries.

Sometimes, even after a thorough medical tests, doctors can not find the original focus of disease. 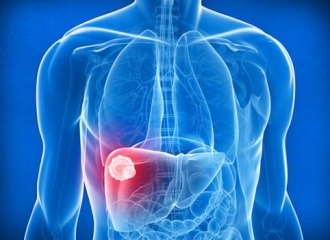 signs of cancer of the liver is often quite vague and did not appear until the disease has reached an advanced stage. Symptoms may include:

People sometimes overlook vague discomfort in the upper abdomen, in some cases painful. This is due to the fact that liver begins to increase. Sometimes the pain can be felt in his right shoulder, the so-called referred pain. A greater volume of the body affects the nerves below the diaphragm, connecting to the nerve fibers in his right shoulder.

When locked gall bile duct, produced by the liver, will flow back into the blood, causing jaundice. The skin and whites of the eyes turn yellow, it may be itchy. For other manifestations include dark urine and light stools.

In the later stages of this symptom is observed as ascites - fluid accumulation in the abdominal cavity. Factors may be several:

It is worth visiting the doctor, if observed in any of the above symptoms. Although they are likely to be the result of a more general condition, but it is better to be tested.

Exact of The a cause of cancer of the liver is unknown, But in will most cases the disease is the associated with damage and scarring process known as with the organ liver cirrhosis. This disease can have several different causes, including excessive drinking for many years, or hepatitis B or C.

It is also believed that obesity and unhealthy diet can increase the risk of developing liver cancer, because they can provoke non-alcoholic fatty liver disease.

Eliminating or reducing the use of alcohol, keeping a healthy diet, exercising regularly; taking steps to reduce the risk of infection with hepatitis B and C, may significantly reduce the likelihood of this type of cancer.

The number of people falling ill from this disease increases sharply with age, approximately 8 out of 10 people diagnosed with liver cancer at the age of 60 years and older. In more developed in males.

In the last few decades have seen an increase in morbidity due to increased alcohol consumption and increasing obesity.

Diagnosis of liver cancer in Israel

If the patient is at high risk of developing liver cancer, it is often recommended regular inspection. Since the earlier detectedoncology , The greater the likelihood of getting rid of the disease.

Observation is usually performed once every six months and includes:

Observation is usually recommended if there is a diagnosis of cirrhosis, although there are other factors that can also influence the risk of developing this type of malignancy.

Of liver cancer Diagnosis in theclinic Assutabegins with examination of the upper abdomen, palpation. Take a blood test to check your overall health and liver function.

If you have previously been diagnosed with cancer and now there is a possibility of secondary liver cancer, conducted several tests to confirm the diagnosis. If the cancer was not, but there is a suspicion of a secondary form of the disease, the patient will be examined to find possible signs of the disease in other organs, and the original fireplace.

In some cases, it is impossible to find a primary tumor. Then set the form of oncology, cell type in order to choose the best optionof treatment .

They will be assigned to several diagnostic procedures, whose task to confirm or refute the diagnosis of liver cancer. If yes:

Further diagnosis of cancer of the liver in Israel:

waiting time results - a difficult time for liver cancer diagnosis in Israel can take from a few days to a couple weeks. Typically, these tests confirm the diagnosis, and it is possible to determine the stage of the disease.

A certain phase of the disease indicates the extent of its distribution in the body. One of the classifications, including the 5 stages:

Stage 0 - the tumor is less than 2 cm in diameter, the overall health of the patient is normal, as liver function.

Step A - holds several tumors, one of which is increased to 5 cm in diameter, the other neoplasms -. Up to 3 cm bolnogo- feels normal, as the work organ.

Step B - there are multiple tumors in the liver, but the well-being of the patient and organ function is not affected.

Step C - hold the above circumstances, the state of health of the patient with poor as the liver or the cancer has begun to spread to the main body of a blood vessel, the surrounding lymph nodes or other tissue and systems.

Step D - liver has lost much of the functionality of, symptoms of the final phase of liver disease, such as the accumulation of fluid inside the (ascites).

If the diagnosis of liver cancer in Israel show a secondary form of cancer in the absence of an early conclusion of the malignant disease, will need further tests to determine the primary tumor. Will be planned important diagnostic procedures, determine further treatment, the doctor will discuss their conduct in the first place.

The past, 2018 was a record year in Israel by the number of organ transplants - for the year performed 592 operations, 100 of them - a liver transplant, which exceeded the figure for the previous year by 33%

Treatment of esophageal cancer in Israel