To date, the Israeli oncologists have modern diagnostic methods and treatment of gastric cancer. The country continuously conducts research to develop new drugs for the treatment of cancer.

The main treatments for stomach cancer in Israel are considered to surgery and chemotherapy, radiotherapy is rarely used.

Diagnosis of gastric cancer in Israel 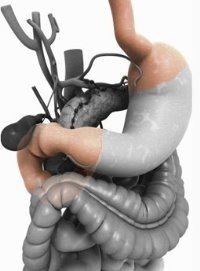 The clinics in the country diagnosis of stomach cancer involves instrumental and laboratory tests.

Fibrogastroscopy makes it possible to study mucous body to define the boundary and shape of the tumor growth, biopsied tissues for histology. More precisely define the boundaries of infestation allows chromo-endoscopy and endoscopic ultrasound diagnosis.

To determine the extent of the defeat of the gastric wall, tumor localization, malignancy ulcers clinic Assutax-ray is used. The combination of X-ray fibrogastroscopy and gives the opportunity to assess the nature of the cancerous infiltration and possible transition of the tumor to adjacent organs.

It is mandatory performed ultrasound of the retroperitoneum and abdomen, bone scintigraphy, PET study of blood for tumor markers. Comprehensive survey ofoncology in Israel allows you to get the information you need to plan and treatment policy.

Selecting the treatment regimen in Israel depends on the stage of gastric cancer, concomitant pathologies and condition of the patient.

Oncologists use all the basic methods of treating cancer: surgery, chemotherapy, radiotherapy. Among the new technologies in the country's clinics used brachytherapy, laser therapy, immunotherapy.

Surgical treatment of gastric cancer is will most often the combined Receiving with cytotoxic drugs and radiation. The clinic Assuta performed subtotal gastrectomy, totalgastrectomywith lymph node dissection and the imposition of the gastro-intestinal anastomosis. About the surgery the Details CAN the BE found! In the article " Surgery for stomach cancer in Israel ."

Chemotherapeutic treatment involves not only intravenous administration of cytostatic, anticancer drugs is also placed in the abdominal cavity after surgery. The more in the Read article " Chemotherapy with stomach cancer in Israel ."

Radiation therapy uses various kinds of ionizing radiation to fight cancer cells. For When the treatment of stomach cancer radiation is administered a in the the following cases:

The procedure is painless and radiation therapy is similar to the X-ray examination. It lasts a few minutes, but is preparing for much longer. Sessions run five days a week for a few months or weeks.

Adverse effects of therapy include manifestations such as vomiting, diarrhea, fatigue, low number of red blood cells, skin changes. A few weeks later, as a rule, they are.

If the irradiation is carried out along with chemotherapy, the side effects are more severe. There are problems with eating, drinking. May use tube feeding.

Be sure to tell your doctor of any undesirable consequences of treatment, because there are ways to alleviate the lot of them.

Radiotherapy for cancer of the stomach is able to cause harm to nearby organs, causing problems such as malfunction of the heart, lungs, increased risk of developing other types of cancer. The doctors are doing their best to prevent these consequences, applying and controlling the required dose of radiation.

It is very important to receive treatment at the medical center, which has considerable experience in the treatment of this disease.

Effective against cancer cells are chemotherapeutic drugs, as they hit the cells with accelerated fission process. But in addition to the rapid growth there are other aspects that distinguish them from normal cells. Scientists have developed drugs that target these differences. In use, develop less severe side effects.

Trastuzumab in the treatment of gastric cancer in Israel

For one of five cases of gastric cancer disease characterized by a large number of protein on the surface of malignant cells called HER2 / Neu or HER2, promoting their growth.

Trastuzumab or Herceptin - a monoclonal antibody to HER2 protein oriented. Taking the drug with chemotherapy agents in advanced, HER2-positive stomach cancer increases the length of life of the patient.

Trastuzumab is administered intravenously every two or three weeks together with chemotherapy. A more accurate optimum reception time is not yet determined.

Side effects of Herceptin relatively mild: it can fever and chills, diarrhea, vomiting, nausea, headache, and weakness. Rare cases of heart damage. This risk is higher if you take certain chemotherapy drugs - anthracyclines: epirubicin and doxorubicin.

Ramucirumab (ramucirumab, cyramza) in the treatment of gastric cancer in Israel

For the growth of malignant cells must create new blood vessels through which the tumor will receive the blood and nutrients. One of the proteins responsible for this process is known as VEGF. It binds to protein receptors on the cell surface to interact. Cyramza is a monoclonal antibody that retains VEGF protein by interaction with receptors for the creation of blood vessels. This drug slows or stops the growth and spread of cancer.

Cyramza used in the later stages of the disease when chemotherapy agents are ineffective.

It is administered intravenously every two weeks. The most common undesirable effects of therapy include high blood pressure, headache, and diarrhea. Rare but serious consequences are thrombosis, severe bleeding, ulceration or perforation in the stomach or in the intestine, difficulty with wound healing. The occurrence of ulcers require surgery.

Complementary and alternative treatments for stomach cancer in Israel

Quite often there are details about the methods that the doctor did not mention. They are used in the treatment of cancer or relieving symptoms. Such information can be heard from friends, family, or find resources on the Internet. These methods may involve taking vitamins, herbs, use of special diets, and acupuncture and massage.

The above mentioned two terms refer to various methods and can be misleading. Additional methods are applied in parallel to a common treatment alternative - instead of primary therapy.

Alternative methods aimed at the treatment of cancer, their safety and effectiveness in most cases has not been proven in clinical trials. Some of them may be dangerous or provoke the development of the negative effects of the treatment. But the biggest threat is the loss of the possibility of receiving the standard of care. Delays or interruptions increase the size of the tumor and reduce the chances of treatment efficacy.

Methods of treating gastric cancer in Israel, depending on the stage of the disease

The choice of treatment program will depend on the stage of development of the disease.

Methods of treatment of gastric cancer in Israel at stage 0

Since at this stage the tumor is located in the inner layer of the gastric mucosa, it will not metastasized deeper apply, as a rule, simple operation. No need for chemotherapy or irradiation.

The basic method of treatment at this stage is subtotal resection (removal of part of an organ) or total gastrectomy (complete removal of the stomach). Nearby lymph nodes are also resected.

For the treatment of certain tumors used endoscopic resection. To do this, use special equipment. This type of operation is often carried out in Japan, where the disease is mostly detected at an early stage as a result of massive diagnostic checks.

Methods of treating gastric cancer in stage I

In step IA is used, usually a total or subtotal resection, is very rarely - endoscopic. Further treatment is normally required.

In step IB main treatment is surgery. Chemotherapy or chemoradiotherapy before surgery may designate - decrease tumor size, to make it easier to remove it.

Quite often after surgery, doctors recommend chemotherapy or chemoradiotherapy. If patients in distant lymph nodes found no malignant cells, further treatment is not carried out. Patients are treated before surgery with chemotherapy, administered its continuation after surgery.

If oncology found in the lymph nodes, can perform chemoradiotherapy or chemotherapy only.

When the patient is too ill - there are other diseases, to do the surgery, the tumor was treated with chemo- therapy, if the patient is able to move it. Other options include the use of irradiation or chemotherapy alone.

Basic treatment at this stage of operation is when the stomach is removed entirely or a portion thereof, omentum, the nearby lymph nodes. Many patients assigned to surgery chemo - or chemoradiation therapy to reduce swelling. After the operation is carried out separately chemotherapy or chemoradiotherapy.

If surgery is contraindicated in the presence of other diseases besides cancer, chemoradiotherapy is used, permitting health. Alternatives can also be separately irradiation or chemotherapy.

Operation at this stage is also the leading method of treatment, if there are no other contraindications. In some cases, surgery, along with other methods of treatment provides healing, and sometimes helps control the disease and improve symptoms.

Chemoradiation therapy and chemotherapy may be administered prior to surgery to try to reduce the size of the tumor before resection. Those who have to undergo chemotherapy can get it after. In other embodiments after surgery are:

At this stage of treatment is to control the disease and relieving symptoms. Apply operation, eg, gastric bypass or subtotal resection to troubleshoot blockage or stop bleeding.

Sometimes perform the following operation: the laser beam is directed to the tumor through the endoscope, destroying it. This helps to eliminate obstruction without surgery. They may also set the stent between the esophagus and stomach to ensure the passage of food. Also, it can be placed at the junction of the small intestine and stomach.

Radiation and / or chemotherapy reduces tumor size, relieve some symptoms of the disease, prolong life, but does not eliminate the disease. combinations of chemotherapy drugs are often used, but which one is the best - is not known.

Targeted therapy may be effective at this stage. Chemotherapy can complement Herceptin for patients with HER2-positive cancer. If chemotherapy is ineffective, prescribe Ramucirumab (Cyramza).

Are able to benefit from innovative treatments that are currently being tested in clinical trials. Even if you can not destroy or shrink the tumor, there are methods that relieve pain and symptoms of the disease. Patients need to be sure to talk about any signs of the disease medical team that treats.

The process of food for many patients with this pathology is a problem. Medical assistance in this matter is possible in the spectrum, ranging from consultation to create a gastrostomy or enterostomy.

Treatment of gastric cancer with relapse

When resuming used disease, usually the same methods as in step IV. But their choice is due to localization, previously applied therapy methods, the general state of health.

Methods are being tested at this time may also be considered as an alternative.

Prices for the treatment of gastric cancer in Israel

The cost of treatment will always depend on the complexity of the disease and sadii therapy. Diagnostic programs existing in Israel are fast and efficient, and cost less than selectively pass procedure.

Reviews for the treatment of gastric cancer in Israel

"Treated stomach cancer in Assuta two years ago. They did an operation and the chemistry of several courses. Restores long in the hospital to keep for a long time did not, and I am glad, because it saves money. And most importantly, helped me cure, for which I am immensely grateful to the doctors Assuta. Everyone knows his job and does not waste a minute of precious time. Thank you "

Treatment of gastric cancer in the clinic Assuta provides recovery and improvement in the quality of life of patients. Extensive experience in the treatment of this type of cancer in the later stages.

Moshe Inbar - himioterapevt, receives patients from Russia and CIS countries at affordable prices in Assuta hospital. Make an appointment with inexpensive, phoned us on the phone.

Dr. Geller Alex is a recognized expert in the diagnosis and treatment of all types of lesions of the digestive tract. Contents appointment at the clinic Assuta Israel, to restore health in the short term.

You need cancer treatment in Israel? Call Assuta. We guarantee a prompt solution of health problems.


Examples of requests for treatment in Israel