Treatment of Ewing's sarcoma in Israel

Cancer, which is formed in the cavity of the bone, called the primary bone cancer. Ewing's sarcoma - a kind of bone cancer, named after the doctor who first described the disease. Ewing's sarcoma includes a plurality of different tumors that have similar qualities and is believed to begin at the same cell types. These tumors can form in the bone and the surrounding soft tissues. Ewing's sarcoma usually appears in the middle of the long bones of the legs and arms, but can also develop in the pelvis and other bones of the skeleton. This type of cancer usually appears in children and adolescents is rare in humans, stepped 30-year milestone.

Fortunately, over the past 15 years in Israeli hospitals have been significant improvements in the treatment of malignant bone tumors, which led to an increase in the probability of cure is 5-10 times (now the number of fully cured patients with Ewing's sarcoma is close to 80%). In addition, the combination of advanced methods of surgical removal of the tumor and modern functional reconstruction can cure 90-95% of patients with this disease without the need for amputation.

The percentage of cure of Ewing's sarcoma is also increased through the participation of patients in clinical trials, which are conducted at medical centers in Israel. Studies in which can participate, anyone, (after consulting a specialist course) may include new methods of treating cancer, the study of the mechanism of disease, progressive methods of maintenance therapy, and more.

Specialists clinics Israel, including Assuta, using an interdisciplinary approach, doing everything possible to treatment of Ewing's sarcoma was individual in Israel. Highly qualified team of the world's best doctors watching your child throughout the treatment to ensure the best chance of successful treatment with minimal impact on the growing body of a young patient.

Ewing's sarcoma is rare, and most oncologists have little experience in its treatment. Studies show that patients with sarcomas have better results in the treatment of large and complex cancer centers. Since the Israeli doctors clinics treat a large number of patients with Ewing's sarcoma - they have a lot of experience and a high skill level that affects the quality of patient care.

How is diagnosed with Ewing's sarcoma in Israel?

Diagnosis sarcoma may be difficult because there are over 50 known subtypes of this cancer, each of which requires its own set of treatment.

Diagnosis of Ewing's sarcoma begins with a thorough clinical history and physical examination of the patient. The doctor may also use specific tests for diagnosis, which include:

Step 4  (metastatic) tumor has spread to lymph nodes in the limbs or other body parts (eg, the lungs).

What is the treatment of Ewing's sarcoma in Israel?

The most common forms of treatment of sarcoma is surgery, radiotherapy and chemotherapy.

Most tumors are removed surgically. This treatment of Ewing's sarcoma in Israel is often combined with radiation therapy to prevent the recurrence of sarcoma.

When removal of the tumor, surgeons try to preserve as much of a normal (healthy) bone. If necessary to replace bone, removed during surgery using artificial implants or bone taken from another part of the patient or donor. Despite the fact that the number of ways to save the limb increases every year, however, sometimes the best option is amputation of the affected limb. Surgeons in Israel are among the most skilled in the world. They use advanced techniques and technologies, including limb sparing surgery, so most patients can avoid the loss of an arm or leg. If Ultimate Rescue operation is not possible, in the Cancer Center offers modern prostheses.

Radiation therapy - a form of cancer treatment that uses high energy X-rays to kill cancer cells with minimal damage to healthy cells. Radiation energy can be internal (radiation source located within the body during surgery) or outside (radiation source is in spetsialtnom equipment where for a certain time the patient is placed). High doses of radiation delivered to the area at risk, while irradiation of normal tissues is minimized to reduce the risk of side effects.

In some cases, there may be used another type of radiation called brachytherapy. Brachytherapy can be performed in two ways: intraoperative radiation therapy (during operation), and interstitial brachytherapy, which is carried out through catheters (plastic tube) after surgery.

Side effects of radiation therapy: 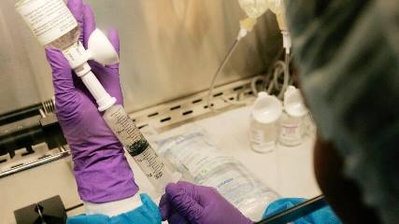 Chemotherapy - is the use of special drugs to kill or slow the growth of rapidly proliferating cancer cells. These medicines are often given intravenously and can have serious side effects. Chemotherapy is often done before surgery to shrink the tumor. Over the past three decades it has been developed new chemotherapy drugs, and improved modes of their dispensing. Israel is currently the most commonly used scheme of the five drugs - vincristine, doxorubicin, cyclophosphamide, ifosfamide, and etoposide (Ladenstein 2010).

Side effects of chemotherapy:

Israeli scientists develop innovative Targeted treatment of Ewing's sarcoma. With the help of targeted therapies block the growth of cancer cells by interfering with the mechanism of action of certain molecules, many doctors who treat Ewing's sarcoma in Israel, in parallel engaged in scientific research, and conduct national and international clinical trials of new targeted agents .

Professor Yakov Bikelshead of the department the treatment of metastatic bone disease in the Israeli clinic Assuta. Surgeon with 25 years of experience is one of the best orthopedic oncology in the world! On account of his several hundred endoprosthesis operations limbs. Professor takes on the most difficult cases, and doing everything possible to keep the maximum patient's own bone.

Yitzhak Meller Professor - a a leading oncologist orthopedist in Israel, with Extensive experience in the treatment of bone cancer. Was an intern in the best clinics in the US and Europe.

Treatment of bone cancer goes through surgery, radiation, targeted method. Successful treatment of Israeli doctors is carried out in such types of tumors as osteosarcoma, chondrosarcoma and Ewing's sarcoma.

soft tissue sarcoma - description of the main methods of treatment in a private clinic of Israel - Assuta - surgery, radiation therapy, the targeted treatment, the use of cytotoxic drugs and other therapies.