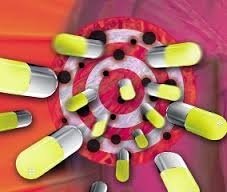 Doctors have identified some genetic changes in the cancer cells of the skin and have developed drugs that act on them. These targeted drugs do not work as standard chemotherapy drugs and have less serious unwanted effects. Still ongoing research on the most effective use of these drugs.

Such preparation is vismodegib (Erivedge ®), which is prescribed for therapy has spread basal cell carcinoma and basal cell carcinoma in the clinic relapses Assuta. The advanced stage of this disease - rare, difficult to treat. Most basal cell have mutations in the genes that are part of cell signaling and are called "signaling pathway Hedgehog». Vismodegib inhibits (prevents or slows down) "signaling pathway Hedgehog», since for basal cell carcinoma, in most cases it is active in the diseased cells. However, the activity can be observed in a number of normal cells - hair follicles. The drug is contraindicated in pregnant women and women who plan to become pregnant because of the possibility of harm to the fetus.

Treatment of basal cell carcinoma in the clinic Assuta with radiation therapy: indications, advantages, process description, side effects, and recommendations.